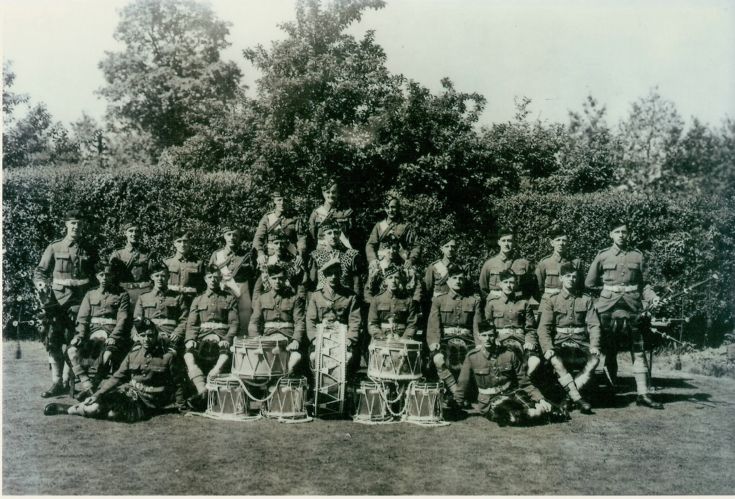 This is the band of the Seaforth Highlanders, taken in 1942. William Arnot Flett (The subject of the pipe tune "Flett from Flotta")is standing second row on the left.

View Large Version
Picture added on 11 December 2007
Comments:
Someone told me that they lost most off them in the battle of El-alamien.only six pipers survived Is that true? Can anyone verify this?
Added by Stuarts Dad. Rodney Flett on 23 August 2011
At 20 to 10 on the 23rd October 1942 the battle of El Alamein opened up with an artillery barrage on a 30 mile front by 800 guns of the famous British Eighth Army.3 o'clock on the 24th saw William Flett's Regiment, 2nd Battalion, Seaforth Highlanders,152 Brigade,51st(Highland)Division, enter the fray.
In El Alamein Cemetery, lie 25 of Piper Flett's Comrades who made the Supreme Sacrifice on the Battlefield at El Alamein, 24th and 25th October. On the 26th, 8 were killed. Between 2nd November, when 23 died on that one day,until 5th November, 39 died. In all, there are 66 of the 2nd Seaforth buried within the Cemetery of El Alamein.I know of 2 who were Pipers and have no evidence to suggest that there were more.Piper Flett survived the North African campaign to see service in Sicily and Northwest Europe with the Legendary Highland Division, as did my Father and Uncle who were in the same Brigade with 5th Seaforth.There is a good photograph of Wlliam in the desert with his pipes in Roderick Grant's book "The 51st Highland Division At War".He was wounded shortly after D Day in June 1944,which put an end to his war.
After demobilization in 1945 he re-enlisted in 1947 and became a legend at Depot Seaforth, Fort George,where he was affectionately known as "Big John".On 13th October 1953 he was awarded the Long Service and Good Conduct Medal in recognition of 18 years unblemished service, which he could add to at least 6 other medals he would have been entitled to.
The famous Piper and composer of tunes, Pipe Major Donald McLeod would have known William well.They both were members of The Seaforth Highlanders during the war although with different Battalions, Donald was also Depot Seaforth Pipe Major in 1941. The pipe tune "Flett From Flotta" was composed when they were locked in together in the guards van with the Regimental silver en route by train to a Regimental dinner in England. Pipe Major Macleod named the tune in honour of his comrade.Incidentally,another fine tune, the 2/4 march, "The 51st Division at Wadi Akarit", was composed for a Divisional competition, which he won, by a L/Cpl from Invershin, Will MacDonald, whilst serving in the North African desert with 5th Seaforth.
2818603 Pte.William("Big John") Flett left Depot Seaforth on August 15th, 1955, on completion of 22 years service. He was regarded as indispensable at Fort George in his role as Piper, within the Officers' Mess and as "Boatman".Guest of Honour at the Sergeants' Mess he was given a farewell drink prior to being "Chaired Out" in the traditional manner.
A quote from his obituary in the Summer 1999 edition of the Regimental magazine "The Highlander"(which was written by an officer of the Seaforth Highlanders), reads,"After he left the Army he sold his croft on Flotta and moved to Australia where he married an heiress! No less would be expected of John Flett, for he was a splendid character.
Added by Nicol Manson on 28 August 2011
To Nicol,, thank you for your information ,re my uncle William.
(Uncle Arnot as we knew Him.). I still have his belt buckle, Stag's antlers ,with the number 78 set on a brass plate!
I sits on my mantle place and when I polish it I always wonder about my uncle and did he wear it in action or only with full dress uniform ?Also what stories could it tell?

Our uncle never spoke about his experiences. If only his buckle could speak! I buey
Added by Stuarts Dad. Rodney Flett on 30 August 2011
It is great that you have your Uncle's waist belt plate, Rodney.It most likely would have been worn with a black leather belt but probably not during battle.

The 78th(Highland)Regiment of Foot was raised in 1793.A second Battalion was raised in 1794,designated the "Ross-shire Buffs",because of the buff colour used by the Regiment on it's facings.Under the army reforms of 1881 the 78th was amalgamated with the 72nd Duke of Albany's Own Highlanders.The 78th became the 2nd Battalion Seaforth Highlanders and the 72nd became the 1st Battalion.

To qualify a point about the casualties taken by the 2nd Seaforh between 24th October and 3rd December 1942, and who are Commemorated in the El Alamein Cemetery and on the Alamein Memorial, I would like to add that 66 brave men made the Supreme Sacrifice,11 have no known graves and are remembered by name on the Alamein Memorial.Total 2nd Seaforth killed, wounded, or missing for the African Campaign were 483.In the dark days of 1942 the men of the North African Desert, in victory, gave our nation hope for better days to come.Some were going to have to endure the battlefields of Sicily and North-west Europe, we have so much to admire and respect them for.
Added by Nicol Manson on 31 August 2011
Hello chaps.
My Katrina Rosie is decended from the Swona Rosies who before that came from Flotta. As I am doing the family tree, I am Steward of the Seaforth Club (Nairn) and my son, Blair, is a piper I thought I wonder if there is a connection. It turns out that there is, so Blair now has two family tunes; 'John Rosie of Swona' and 'Flett from Flotta'. I must get a photo of William for the Club. Cheers, Martin
Added by Martin on 21 March 2012
It's been a while since I was on here and it's good to see the updates. Piper Flett's medals are still with the family. I have a photo of them in their presentation case. Martin, there is a photo among my contributions of Piper Flett, feel free to make use of it for the club.
Added by Stuart Flett on 24 March 2012
<< back