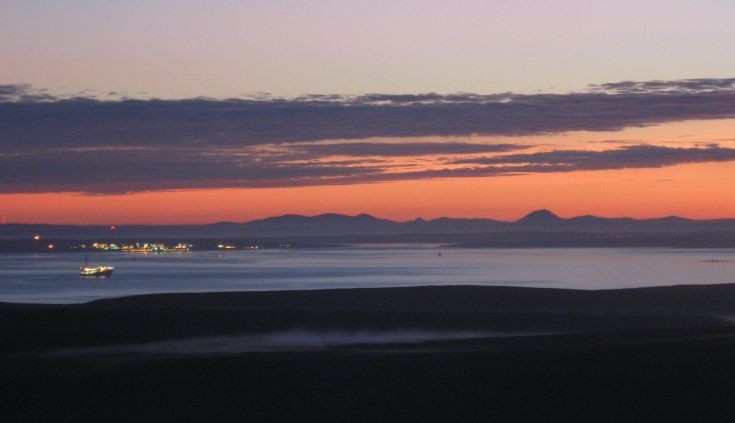 At dusk, taken just before picture #26051. Not sure what the hills/mountains of Scotland are, but I'd hazard a guess at Morven and Scaraben being among them.

View Large Version
Picture added on 22 January 2012 at 13:25
Comments:
Fine shot, Steven! The mountains look remarkably near, and sharp. I agree the highest peak is Morven, some 60 miles away.

[Taken with a Canon Powershot A590IS - a pocket camera that goes fully manual. I've been prevaricating about getting a second hand Pentax DSLR to get some use of the lenses I have for my film cameras. So now I am kicking myself at not snapping up a stunning Buy It Now bargain on eBay right away, only to try and buy it five minutes after it had gone... - Steven]
Added by Ian Hourston on 22 January 2012
That's a lovely photo, Steven.
Added by Isobel Irvine on 22 January 2012
I think Morven is the highest peak.
Added by Bruce Moar on 22 January 2012
Great photo Steven. A well known local singer/ Met man once told me that if you can see Morven from Orkney, it is going to rain. If you can't see it - it already raining. But what do singers know!
Added by Sandy on 22 January 2012
My auntie Davina Wilson called her house in Longhope "Morven" after that hill. I always thought it was a nice name.
Added by Beryl Simpson on 22 January 2012
From left to right: Meall na Caorach, East Scaraben, Scaraben, Sron Gharbh, Maiden Pap, Smean, Carn Mhor, Morven, Small Mount and (furthest west) Cnoc an Eirannaich. Hills I know very well.

[Thanks David! - Steven]
Added by David Dawson on 23 January 2012
From David's comment for picture #7325:
"Scanning the horizon from left to right: Scaraben, Maiden Pap, Smean (and just hidden by the chimney lies Carn Mor) then Morven, Small Mount and finally Cnoc an Eireannaich - locally known, as one can guess from its Gaelic name, as 'The Irishman'.
Views from Morven at 2,313' (highest point in Caithness) especially on a crisp, clear winter or spring morning encompass a surprising amount of Orkney, besides across the Moray Firth to the Cairngorms beyond. Well worth a detour off the A9 and a bit of a hike if well equipped."
Anonymous comment added on 23 January 2012
It's a pity hills aren't required to have names in English as well as Gaelic, as with road-signs etc. I'm sure many of us don't know the correct pronunciation, let alone the meaning, of half these names. Perhaps David - with his intimate knowledge of mealls, srons, carns, cnocs and, of course, maiden paps - could help us out a bit here?
Added by Ian Hourston on 24 January 2012
Should have added - great photo Steven - the view of Orkney from Morven's summit (on a clear day) besides south to the Cairngorms is just as good. Unfortunately I don't have a decent pic in a northerly direction - the last time I was there it was a bit too hazy.
Added by David Dawson on 24 January 2012
And here was me thinking nobody in Orkney would be too bothered about Gaelic/English translations! For Ian’s (and others interested) benefit the English meanings are:

Meall na Caorach – ‘Round Hill of the Sheep’.
Scaraben - Not entirely Gaelic. In fact nobody is absolutely certain as to its origins - but it is possibly Norse meaning Skora-fjall (incised mountain) with ‘ben’ (mountain) being added through Gaelic influence in favour of ‘fjall’. Fell is still used in northern England (particularly the Lake District ) in areas colonised by Norse settlers.
Sron Gharbh - ‘Rough Nose’ (sron – nose; gharbh – rough) There are one or two other hills/mountains bearing this name in the Highlands, the most notable being in Glencoe.
Maiden Pap - English; a closer viewing would see that this is pretty self-explanatory!
Smean - I’ve never known a translation for this hill. Whilst it could be possibly Norse/Gaelic corruption, the closest I can get to a likely meaning is from the Gaelic word ‘smeachan’ meaning chin (masculine). Makes sense, as one or two folk of my countrymen in the Dunbeath/Braemore area have remarked that Smean and Carn Mhor together resemble the profile of a large nosed person. Carn Mhor being the nose and Smean fitting perfectly as the chin. That, I stress, is pure conjecture on my part!
Carn Mhor - ‘Big Cairn’ – actually the massive tor of rock on the larger hill Smean
Morven - ‘Big Mountain’ (mhor bheinn) – some Caithness folk – largely those outwith the three original Gaelic speaking parishes (Latheron, Halkirk and Reay) incorrectly label it as ‘Ben Morven’ – translated as ‘mountain big mountain’.
Small Mount - English and relatively self explanatory when compared with Morven.
Cnoc an Eirannaich - known locally as ‘The Irishman’ (cnoc – round hill/knoll; Eirannach – Irish or Irishman)
As you may know Gaelic has (like most languages) often more than one word to describe a feature, particularly those in the landscape – hence ‘cnoc’ and ‘meall’ sharing the same meaning.
Ian - you’ll be regretting you ever asked me……!

Added by David Dawson on 25 January 2012
Sorry Ian...should have added the pronunciations:
Meall na Caorach - Me-yall na Keu-o-rach
Scaraben - Skar-a-ben
Sron Gharbh - Stron Garv - the most simplistic written description although pronunciation is more complex, the 'G' being less hard than in the Ross and Cromart placename Garve and involves a slightly more complicated tone...
Smean - Smee-an
Carn Mhor - Karn Mor
Cnoc an Eirannach - Crock-an-Air-anach.
(Honestly Steven - I'll stop now!)
Added by David Dawson on 26 January 2012
Thank you David for your kind diligence on behalf of us non-Gaelic speakers. I still don't think I'll have the confidence to read those names out loud, from a road map for example, but the meanings are interestig and helpful.
I don't suppose you can shed light on something that has always intrigued me but has eluded my researches to date, viz: how the Roman alphabet which, roughly speaking, makes much the same sounds in most countries that use it, came to be used so differently in Gaelic. An intelligent lady, whose first language was Gaelic, told me a couple of years ago she didn't trust herself to write anything important in her native language for fear of getting it wrong. That struck me as odd, not to say sad, but written Gaelic does seem a bit daunting.
Added by Ian Hourston on 26 January 2012
There are plenty of examples of the Ben Morven tautology in the Orkney Islands. I've just used the commonest one.
Anonymous comment added on 28 January 2012
Ha! Anonymous alludes to the tautology in "Orkney Islands". Territorial and place names are often of this nuture. A good example is Pendle Hill. Go on: Look it up.
Added by Sandy on 30 January 2012
Sorry Ian, to be quite frank I’m not entirely sure as to the answer to your question other than to say that as regards Gaelic consonants come in pairs, one "broad" pronounced with the back of the tongue pulled back towards the soft palate) and one "slender" pronounced with the middle of the tongue pushed up towards the hard palate). While broad-slender pairs are not unique to Gaelic -both Irish and Scottish - with Russian having a similar system, there is little doubt that it poses difficulty for English speakers.
It’s not uncommon to find many Gaels who can understand spoken Gaelic but who have some difficulty with conversational. Despite the present renaissance in Scottish Gaelic thanks to the media and education (Gaelic medium schools and Sabhal Mór Ostaig on Skye etc), I have often been told that - arguably - the purest form of Gaelic is that spoken in Nova Scotia.
Indeed arguments rage throughout the Highlands and Hebrides as to where one may find the purest form. So far as Caithness is concerned, the language died out in the early 20th century with there being only just over 600 fluent Caithness Gaels by 1931 – the majority within the parishes of Latheron (where lie the hills in question) and Reay, both sharing boundaries with Sutherland.

Added by David Dawson on 01 February 2012
I have no gift for languages, and I'm not about to try to learn a new one now, but what you say David is interesting and illuminating, on general grounds, and thank you very much for it.

I did go and look it up Sandy: Hill-hill Hill. Yes, that's pretty tautological I'd say.

Slightly different, but on the same theme of evolution of place-names, is the case of Banks in Birsay. Marwick's indispensable 'Orkney Farm-names' confirms that the farm of Banks is named, as we would expect, from its being on the bank of a loch. Then the loch is named for the farm - the Loch o Banks. What name it had previously I know not. There are probably other examples of the same 'circular argument' in Orkney place-names.
Added by Ian Hourston on 01 February 2012
<< back