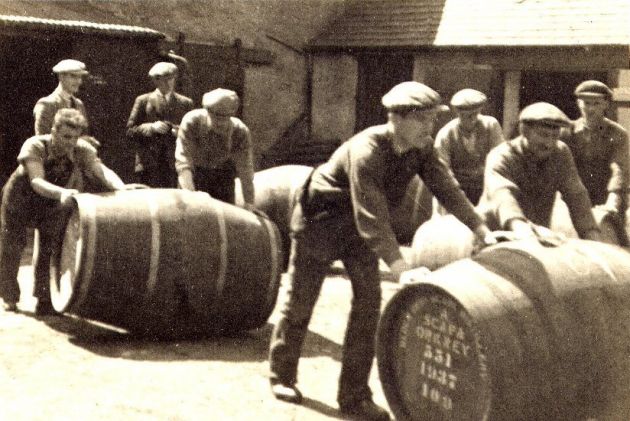 Reopening of Scapa Distillery after WW2

Tom writes:
'I've come across this old photo in my collection. I'm not sure of the date but I always understood it to be the reopening of Scapa Distillery after WW2. The date on butt number 551 is 1937 containing 109 gallons but if this is 1945 or thereabouts it would be a eight year malt being shipped out. On the other hand it may have been a newly filled sherry cask in 1937. I think the man on the far side of the first cask is Jock Sinclair of Seafield and the man on the far side of the second is my father, Tom Scott. Judging from their age appearance I favour post war. I know my father, who was head still-man before closure in 1939, was called back in retirement in an advisory capacity for the reopening and I understood this photo was part of the formal re-opening. The two well dressed gents in the background are probably the Distillery Manager and the Excise Officer.'

View Large Version
Picture added on 18 June 2004
Related Sites: Kirkwall East Church
Comments:
Not related to this particular picture but some short pieces of films about Orkney, each one lasts about a minute.

This link gives you the full list but only those links below show you
a short clip.
click here for link


Huge lumps of Orkney butter are emptied from the churn into a cart and
prepared for packaging in the Claymore Creamery.

Added by William Sinclair on 10 April 2009
My husband came across this photo whilst browsing Orkney and called me to look. Jock Sinclair of Seafield was my grandad and although the photo is not over clear I can recognise the gentleman concerned as definitely being my grandad.
Added by Grace Scott nee Sinclair on 06 January 2015
<< back