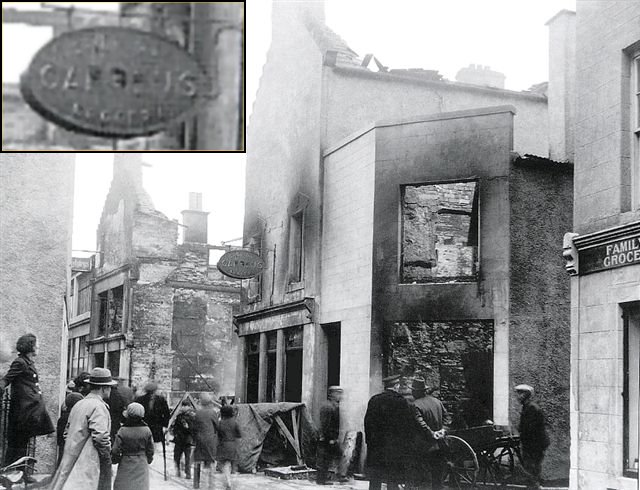 showed Garden's in 1930's, but this picture shows why there is a gap site on Bridge Street.

I've resampled and smoothed the sign on the nearest burnt out building to give the inset picture, and have convinced myself that it says 'Grocery' along the bottom. Is this correct?

View Large Version
Picture added on 25 August 2006
Related Sites: Kirkwall East Church
Comments:
If the smaller building, this side of Gardens is no. 30, now Sheila Fleet, it used to be my Grandfather's Watchmaker & Jewellers shop in 1901-1903, (David Sinclair of the Quoys, Holm). Can anyone remember all the occupant's of that shop between then and now ? I think Jimmy Sinclair, no relation, the Photographer, was there selling Gramophones and alistair MacLeod, any other suggestions ? Dates would be handy.
Regards, Gordon Sinclair
Added by Gordon James Sinclair on 20 April 2007
By the way, should anyone have a frontal photo of this shop, no. 30, over the years, I would be pleased to hear from you. I have many glancing side shots but not frontals.
Regards, Gordon.
Added by Gordon James Sinclair on 21 April 2007
The shop you are looking for Gordon, is the third shop up the street from this one, on that side.
The shop on the extreme right in this photo above was for many years (in my time)owned by the late Ronald Slater and sold Wines and Spirits.
Last I knew it was occupied by Orkney Photographic. [Still the case. Wasn't it a knitwear shop for while in between? - Steven]
Added by Peter Burges on 21 April 2007
Peter, take a look at your own entry picture #1682. The nearer building, judging by the window configuration, appears to be the one with the sign under query which is clearly "Shop at GARDEN'S Drapery". I would suggest the "Family Grocer" on the building next door was Garden's Grocery, apparently untouched by the fire. You will notice in No.1682 there was a similar sign over the further away building which I have no doubt read "Shop at GARDEN'S Grocery"
Added by Tom Scott on 22 April 2007
Where the peedie lass is standing on the wall - is that No.23 ? If so these buildings were all taken down to make the big Garden Square or am I at the wrong bit?
Added by Barbara on 23 April 2007
So if I understand you correctly Tom, Ronald Slater's shop was at one time occupied by Gardens? Before my time - I can only remember as far back as Ronald.

Obviously the fire-damaged building in the middle of the above picture was razed to the ground and its site is part of the open yard but what about the damaged building further away? Was that rebuilt and became what I knew as the Garden's Bakery Shop?

BTW, these are fascinating pictures, Peter. Do you have any others not published here?
Added by Fred Grieve on 23 April 2007
Having taken further "looks" at picture #1682 and picture #1683 above, as suggested by cousin Tom, I might add the following deliberations.
First of all, looking upstreet in 1682, there appears to be two openings between the buildings, one between the two Garden shops, and one between Garden's and what is now Orkney Photographic (formerly Ronald Slater's), which incidentally must have been a grocer shop at that time. In this particular scene, the nearest Garden's shop is very clearly "Drapery" according to the sign above, the sign upstreet being unreadable from this angle.
In picture 1683 above, looking downstreet, and also the inset of the upper sign, (kindly supplied by Steven), who I am inclined to agree with, says that it reads "Grocery".By the time this picture was taken, the frontage of part of the building downstreet must have disappeared along with the "Drapery" sign.
I am almost certain that the building on the extreme right of the above picture (1683)is the building now occupied by Orkney Photographic.
On the opposite side of the street the young lady standing on the dyke hanging onto the railings is on the upstreet side of what was John Jolly's coal merchants office. I must refer to B.(J.)W.'s picture #2869 to qualify my last sentence for this statement.