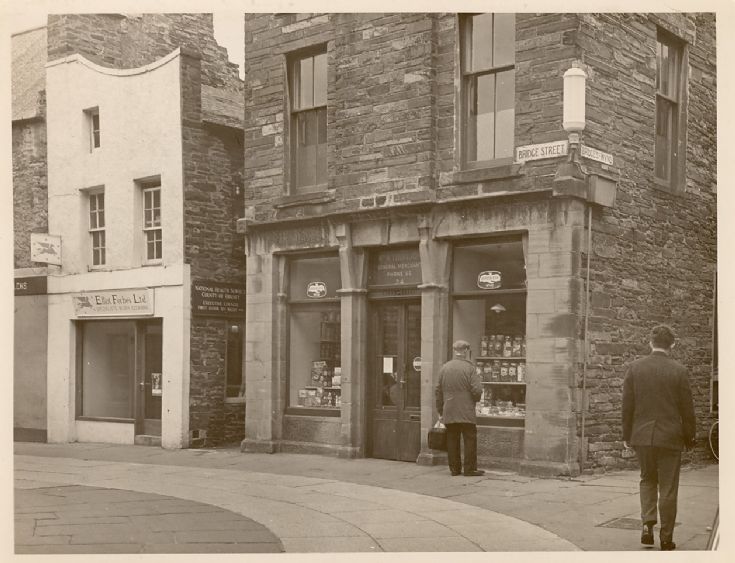 In response to Gordon James Sinclair's request - picture 1683. This photograph shows the front of 30 Bridge Street when that shop was occupied by Elliot Forbes, the Dry Cleaners, who took over the premises from James W. Sinclair, the Photographer. The sign on the side of that building was for the 'National Health Service - Executive Council' offices which were situated on the 1st floor of 34 Bridge Street, above Wilbert Thomson's shop. The NHS Executive Council was managed by Mr James Moodie who lived in either Laverock or Broadsands Road. It is interesting to note that I took this photograph with a 'Kodak Brownie Cresta II' camera which I bought from James W. Sinclair, the Photographer - the RRP was £2-1-10 (two pounds, one shilling + 10 pence - pre decimal)- I still have the camera which is in good working order!. The spec. of the camera is:- lens: Kodet f/11, shutter: 1/40 sec, film type: 120, picture size: 2+1/4 ins square, produced between 1956-1959.

View Large Version
Picture added on 29 July 2007
Related Sites: Kirkwall East Church
Comments:
At the far end of the lane between 30 + 34 Bridge Street was a house (presumably 32 Bridge Street) which was occupied by Miss Evelyn Cox and her mother. Evelyn used to have a small grocery shop in St Catherine's Place, Kirkwall, on the ground floor of the house next to the oil depot.
Added by Rob Thomson on 29 July 2007
On the extreme bottom right hand side of this photograph is an object. I think that the object is part of a bill-board advertising either goods or newspapers from Stevensons Shop which is just out of the picture. If one was to walk up Bridges Wynd for about 20 yards - one would have come across the Salvation Army Hall. Continue up the Wynd and one would eventually come to Garden's Lemonade Factory and the East Road. Again - If you were to turn left and go on down Bridge Street - one would eventually end up at the Kirkwall Harbour. "Buddy" Miller used to have his barber shop just around that corner. I think that Eric Kemp now runs a Sports Shop in or around about the same area.
Added by Edward Borwick on 18 March 2008
Thank you very much Rob, I have quite an album now on Bridge Street, unfortunately I still await one with David Sinclair, Watchmaker on the front. I live in hope that maybe somebody like Jimmy Sinclair took a photo of his old shop when it was Grandfathers. Regards, Gordon.
Added by Gordon James Sinclair on 18 March 2008
My gr grandfather William Shearer had the hairdresser I think you are referring to in the early 1900's. Is there a photo of the hairdressers?
Added by Norman Shearer on 08 September 2009
<< back