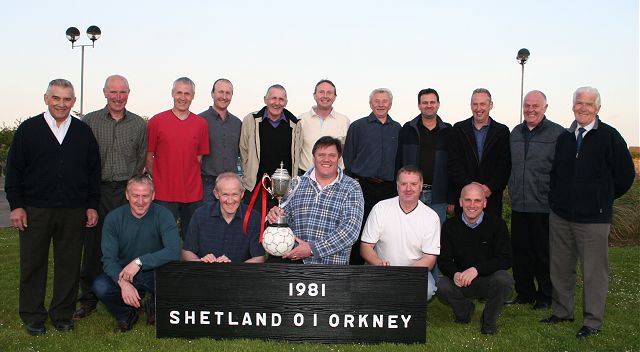 '[This picture shows] a small reunion the 1981 Milne Cup winners had last week. They were the last Orkney team to win the trophy in Shetland but unfortunately no picture was taken on the night. Orkney beat Shetland 1-0 and the only goal was scored by Colin Mcleod who is holding the cup.

The line up is:
Back row:

Missing from the photo is Graham Findlater who came on as a substitute and the late Robbie Pottinger who was the third selector.'
Picture added on 15 June 2005
Related Sites: Kirkwall East Church
Comments:
I omitted stevie nicolson in the line up. He is pictured 4th from the left in back row between robbie oag and morgan harcus.
Added by Rae Slater on 15 June 2005
Stevie Nicolson is between RO & MH
Added by Alan Stevenson on 16 June 2005
<< back