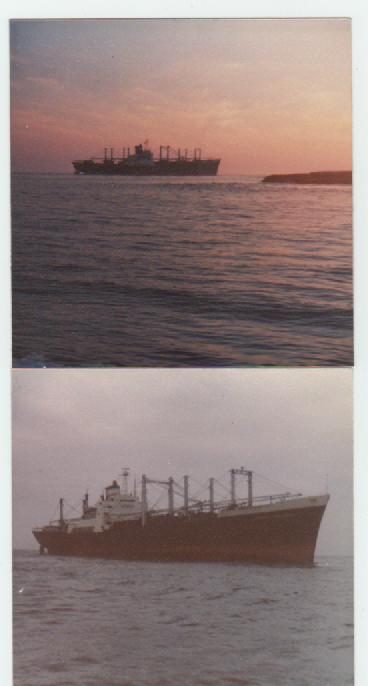 The Pioneer Commander went ashore on the Pentland Skerries in thick fog - she was a merchant ship but attached to the American army and was returning to the USA from Germany.
The Longhope Lifeboat along with the Lifeboat from Wick stood by her for three days .
From memory I think she was 12000 tons:. When we went alongside and boarded we were shadowed by a guy wearing a gun who looked as though he might blow our heads off if we looked at any of the corgo
The cargo was arms returning to the States after the army pulled out of Germany.
I think it was 1974?. I do remember that it was the morning of the County Show and that we were not going to be able to make it to Kirkwall that day!!.

View Large Version
Picture added on 31 October 2007
Comments:
I think it was in August 1977 that the Pioneer Commander went on to Louther Skerry. It took a good 10 days before she was refloated.
Added by Barbara on 01 November 2007
13. 8.77 cargo vessel "pioneer commander" of usa ran ashore on louther skerry - refloated 10 days later. Info supplied on caithness.org
Added by Kirkwallian on 01 November 2007
you would have been a young lad then john
Added by Callum Maciver on 03 November 2007
Hid must be 77 because I mind going roond to see it with me mum and dad. And if hid was 74 I have a hell o a memory
Added by Pauline Duncan on 27 January 2009
It was 77 as the oil had not been long in coming to Flotta, I had not been long working for Flotta Marine Services out of the Hope and we helped load some savage gear on to one of Jim Newlands` boats as he was working for the agents at the time. Occidental also helped deploy the sea packs to catch some leaking bunker oil from her. I wasn`t on shift when this went on but I was involved in cleaning up the boats and equipment afterwards.
Added by Bryan Guthrie on 14 April 2009
Does anyone have photos of the rescuing ship, the TV company who covered the rescue and any newspaper cuttings? Thank you
Added by Christine Ferguson on 10 August 2009
The tug that came to tow her arrived I think on the second day after the grounding and was I think called Typhoon. Maybe she was from the Netherlands?
Mr Dougle Cambell who was engeged in salvage work on the German ships in the Flow came out to survey the grounded ship we told him that he would only have about ten minutes of slack tide, I think he took the advice rather lightly and went in as the tide eased, about ten minutes later he was flying on the surface like a kite, luckly we had a line attached to him and it was quite a haul to get him back to the Lifeboat I dont think there was any more diving done on the ship untill she was alongside at Lyness.
When Dougel survayed the ship at Lyness he brought old Sandy Robertson of diving fame as an adviser, Sandy gave his advice on how to look for plates pressed up and how to compare the bilge keels to the skin of the ship, I was there at the time and was privelaged to hear the wisdome of a very experienced salvage diver. Things like that stay with you forever!!.
Added by John Budge on 11 August 2009
Refloated by ground tackle and the Wijsmuller tug - TYPHOON. taken to Lyness where she was found to be very badly holed.
Anonymous comment added on 11 August 2009
Christine, If you get in touch I should be able to help you with photos etc. Allan
Added by Allan Besant on 12 August 2009
Thank you all for your most interesting comments. Anyone get any copies of TV coverage? There must have been pohotos in the press of some of you? Also did anyone have contact with the Mare Silentium's Captain. Captain Hoeberichts.(This ship came to take the oil from the Pioneer Commander). I understand there was a TV interview in which several local people and the Dutch crews took part. Were there any aerial photographs? Maybe some archival material I could view? Most grateful to you all for your kindness in answering. Christine Ferguson
Added by Christine Ferguson on 12 August 2009
Allan Besant:- Allan I am on [email protected] If you will kindly give me a contact email address and a tel number I shall certainly be in touch. Thanks so much. Christine
Added by Christine Ferguson on 17 August 2009
Allan Besant do you have any photos of Clettack Skerry?
Added by Richard Evans on 05 September 2019
It was my (late) uncle, mister Ed Hoeberichts, of the Mare Silentum who assisted the Pioneer Commander between 13 and 17 august 1977. The crew of the Pioneer made a tribute song : Captain Hoeberichts Tribute (Havana cigars), as he only wanted a box of Havana’s as a reward.
Added by Ton Hoeberichts on 24 November 2019
<< back