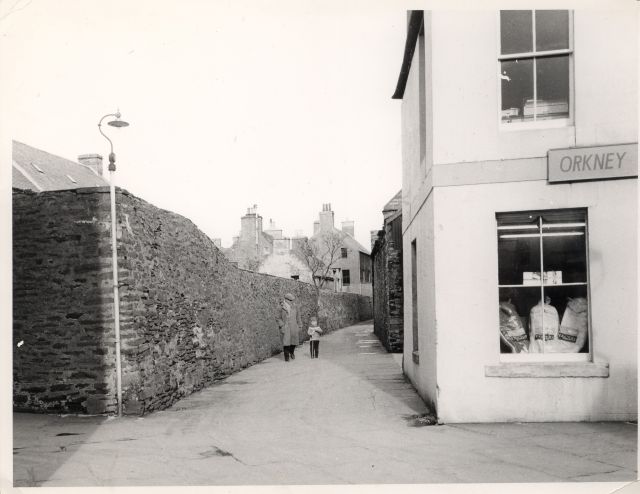 A Dougie Shearer picture sent in by Craig, who writes:

'[This] shows the lane which stood where the Albert car park is now.The shop on the right is now Clark's optician,but at the time of the photograph I think it was Orkney Tourist Board? Not sure what the name of the lane was or who the two people in the photograph are or even a date. This photograph is typical of of the type which Dougie gave me, taking photographs of normal everyday street scenes and shops around Kirkwall,which later become very interesting as time passes by and things change and move on .I am grateful that Dougie took these and passed a few of them on to me before he died as the photographs he captured of this type show places which will never be the same again.'

The date is an estimate, and who are the people?
Picture added on 26 October 2004
External Links
Fishing Boat Videos
Related Sites: Kirkwall East Church
Comments:
Craig....for what it's worth, I have an even older picture of this lane taken from the other end, by the late Tom Kent. His photo is entitled "Burn Lane"

The name probably comes from the fact that the Willow Burn runs down to the sea, practically the full length of this lane, or so the story goes.

During the years of the second world war, this lane was actually used as an air-raid shelter. It was built up and had a reinforced concrete roof for most of it's length, as I remember.
Peter Burges.
PS Good picture this...hope you have a few more like this..........P.B.
Added by P. Burges on 26 October 2004
Cars used to drive down this lane. Slight problem entering from the far end at Kemps shop as the lane was narrow there. Pillars were eventually put at the top end of the lane to stop traffic driving down the lane.
Added by marion mcleod on 31 October 2004
The date of this photograph would be about 1966/67, when the building on the right was occupied by Orkney Tourist Board and VikingWays who were agents for Faroe Airways, the airline which operated between Denmark, Norway, Kirkwall and the Faroe Islands. I was an office assistant there at that time. The articles on display in the window are baby sleeping bags which we imported from Norway, together with down duvets, as a first for Orkney.
Added by Margaret Sinclair on 14 November 2006
You're right this was in fact Burn Lane. At the other side of the high wall was our garden. It had a very rich black soil. In the distance you can see what was our house and where John Jolly's was located (21 Bridge Street).
Added by Barbara on 06 January 2007
Yes the burn culvert runs down lane next to old Leonards, down this lane, down lane in front of Albert Hotel where it splits in two, crossed Junction Road and then turned right to come out at Shapinsay terminal.
I have walked down it.
The last bit was diverted down Burnmouth Road to come out in Peedie Sea.
Added by Graham Wylie on 08 February 2009
<< back