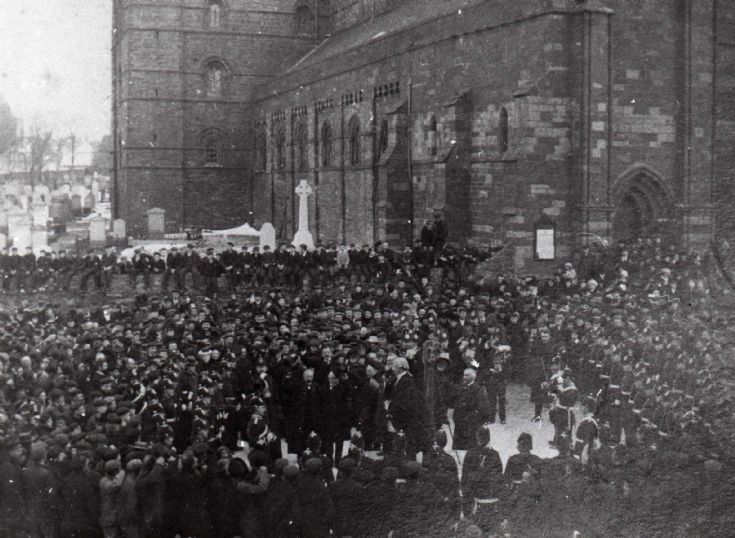 Monday 28th January 1901, a day of wind and snow as bad as anyone can remember. Having marched around the town with various other dignitaries and representatives of sections of the community, preceded by the band of the 1st Orkney Artillery Volunteers, Sheriff Cosens, in wig and gown, ascends the steps of the Market Cross with Provost Nicol Spence, and reads to the large crowd: "Whereas it has pleased Almighty God to call to His mercy our late Sovereign Lady Queen Victoria of blessed and glorious memory, by whose decease the Imperial Crown of the United Kingdom of Great Britain and Ireland is, solely and rightfully, come to the high and mighty Prince Albert Edward: We, therefore, the Lords Spiritual and Temporal of this Realm, being here assisted with these of her late Majesty's Privy Council, with numbers of other principal Gentlemen of Quality, with the Lord Mayor, Aldermen and citizens of the City of London, do now hereby, with one voice and consent of tongue and heart, publish and proclaim that the high and mighty Prince Albert Edward is now, by the death of our late Sovereign of happy memory, become our only and lawful and rightful liege Lord, Edward the Seventh, by the Grace of God King of the United Kingdom of Great Britain and Ireland, Defender of the Faith, Emperor of India; to whom we do acknowledge all faith and constant obedience, with all hearty and public affection, beseeching God, by whom Kings and Queens do reign, to bless the Royal Prince Edward the Seventh with long and happy years to reign over us. God Save the King." The band then strikes up the National Anthem, the Volunteers present arms, and the flags are run up from half to full mast. On seeing the flag on the Town Hall, a detachment of Volunteers at the Mount begins a 21-gun salute, while the Sheriff calls for three cheers for the King-Emperor, and the Provost calls for three for the Queen-Empress. And as the crowd responds, a photographer releases his shutter.
Picture added on 28 April 2007
Related Sites: Kirkwall East Church
Comments:
The figure in the Inverness cape to the right of the cross is W P Drever and to the left with bow tie and droopy moustache could be T W Ranken. Does anyone have pictures of the similar proclamations in 1910, 1936 (two) and 1952? The wording on each occasion was much the same, except in December 1936 when the change of monarch resulted from abdication, Edward VIII not having been called to God's mercy but to Mrs Simpson's bed.
Added by Paul Sutherland on 26 June 2007
<< back