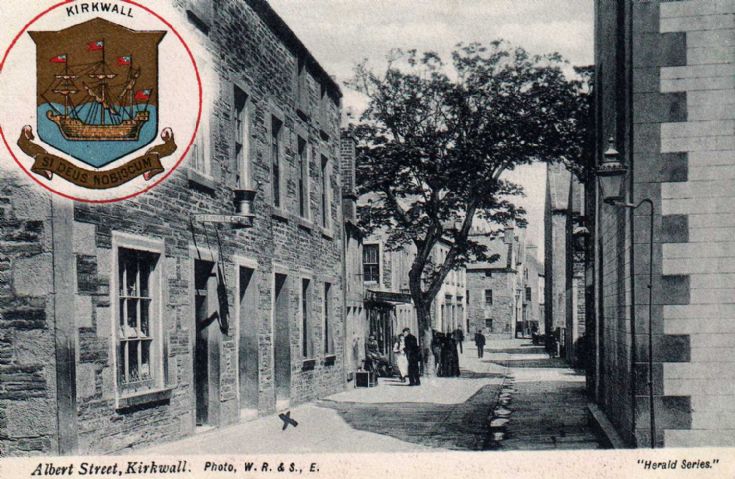 Another postcard showing the Big Tree. This one was sent on 21st December 1906 bearing Christmas and New Year greetings to a Miss F L Currie, c/o Mrs Stacey, The Firs, Maidstone from B and E Bell. As the door to the doctor's surgery and house that later became the British Linen Bank building is shown marked with a cross, presumably one of the senders was Dr B D C Bell who had a practice in Albert Street at the time. The card also shows the arms of the Burgh of Kirkwall. These lapsed when the burgh ceased to exist as a legal entity in 1975. The Community Councils of many other former burghs, including Stromness, Lerwick, Wick and Thurso, have applied to the Lord Lyon to have their burgh's old arms granted to them so that this reminder of their histories can be kept alive, but Kirkwall hasn't. Why not?

View Large Version
Picture added on 04 April 2007
Related Sites: Kirkwall East Church
Comments:
I think Kirkwall has, a few years ago. It certainly appears at the top of all the Community Council papers. I'll ask Spencer Rosie and report back.
Added by Steven Heddle on 04 April 2007
Good heavens. How old is "our" tree? Who planted it and why?
Added by Barbara on 04 April 2007
Have a look at picture #598 . Was the tree not in the garden of Samual Laing? The wall in the picture was moved for road widening and the tree was left where it was. www.orkneycommunities.co.uk/imagelibrary/picture/number598.asp
Added by Kirkwallian on 04 April 2007
See the comments on picture #1214
Added by Paul Sutherland on 05 April 2007
So in fact "our" Big Tree could be over 200 years old. It could even be over 240 years old if I worked it out right! It is fantastic this Orkney Image Library and the people who contribute to it. I learn something every day. Thank you.
Added by Barbara on 05 April 2007
I've not heard of the arms being formally applied for, but I'll be interested to hear the current position. My comment was based on a report in "The Orcadian" a couple of years ago that the issue had been discussed by the Community Council. It was pointed out that the continued use of the arms by the council on plaques etc was illegal unless they applied to the Lord Lyon and obtained a formal grant of the arms. Unfortunately the idea of doing so was pooh-poohed. "We're not scared of the Lord Lyon. Na-na-nanana!" seemed to be the attitude. Now, it may be that the Lyon Court Procurator Fiscal would not bother prosecuting the Community Council (though I wouldn't like to guarantee that!). However, coats of arms are rather like trade marks and patents. If you don't have it registered in your name, someone else might come along and register it in theirs. And I'm sure someone else would soon stop Kirkwall using them. So I think it would be very sensible for the Community Council to do what 93 other Community Councils have done and make a formal application to the Lord Lyon. I believe it costs no more than a few hundred pounds.
Added by Paul Sutherland on 09 April 2007
Hi Paul- I asked Spencer Rosie (KCC chairman) about this, and he confirmed that the KCC had indeed had the arms granted back, and as you say it had cost hundreds of pounds for this to take place. So it is all above board now.
Added by Steven Heddle on 10 April 2007
Sorry for falsely accusing the Community Council. I think I may have got confused with the arguments about the Orkney flag. It would be nice, if possible, to see the grant of arms posted on the site, for they are often rather beautiful things themselves and typically have a long historical narrative of the background to the arms being granted (but I will quite understand if, after my earlier comments, someone tells me where to go!).
Added by Paul Sutherland on 10 April 2007
I'm sure Bill Hewison wrote somewhere that there is a reference in Laing's papers along the lines of 'pay ... for six trees for the garden' which tied in with the age of the remaining tree.
Added by Karl Cooper on 11 April 2007
<< back