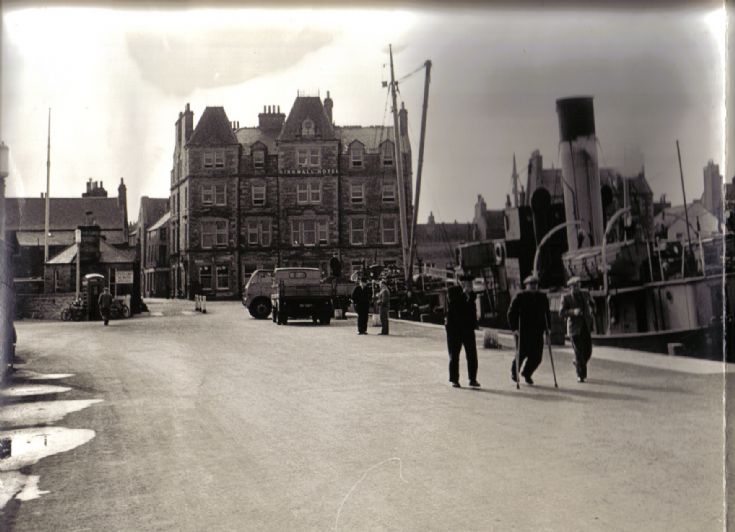 The date is a guess. Don't know the three men in the front of the photo but I hope someone can help. Albert Jolly (my great uncle) and dad (Billy Jolly - coal)are the two men at the back beside 2 of their coal lorries. The man on the lorry could be George Seatter. I don't know where the coal was from but the name of the boat was the Finvoy registered in Belfast. I love this photo as you can see the old telephone box, the "scales" as I called them when I was peedie, for the weight of the lorries/cars and then Bridge Street beside the Kirkwall Hotel. The photo has been folded which is a pity as it also shows houses on Shore Street.

View Large Version
Picture added on 18 March 2007
Related Sites: Kirkwall East Church
Comments:
The picture was taken pre 1958 The man on crutches could be Sammy Walls
Anonymous comment added on 04 February 2010
The " Finvoy" was built in Alloa in 1920 and purchased by Bremner & Co. in 1957. On her third voyage for the company her furnace crowns burned out and she was towed into Kirkwall by the "Earl Thorfinn". She was broken up in 1958.
Added by Fred Johnston. on 04 February 2010
Thank you for this information. I'll write it on the back of the photo so that the next generation don't have to go hunting like I have done.
Added by Barbara on 07 February 2010
<< back