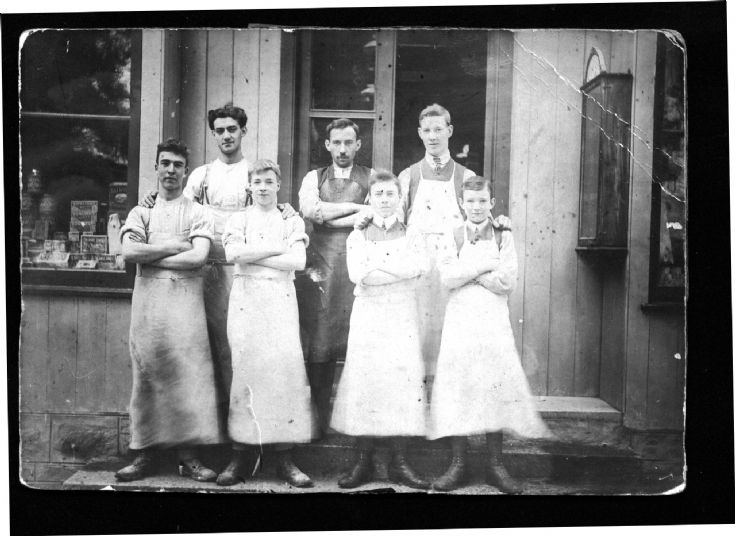 This photo was taken in Kirkwall in about 1905 as my grandfather (James Sinclair) emigrated to Canada in 1910. Of the four boys in the front row my grandfather is the blond, second from the left. His brother Robert is the lad on the right with the other two boys under his hands. The man in the middle is the baker James MacGillivray (maybe variant spelling I'm not sure). He and his wife Jemima [Borwick?] were known as Mr. and Mrs. Mac to the boys and they adopted them both when their parents died in 1893/94 (great grandfather John Sinclair was mate on the Orcadian,[Capt John Smith, Robert Walls and William Miller also lost] a coal schooner lost in a gale in 17th November of 1893, their mother Jane Sinclair (Isbister) died of consumption six months later - the family story says she died of a broken heart). Mr Mac and his wife brought the boys to Meskinaw, Saskatchewan in 1910.

I don't know where this building was located (but my grandfather was born at 9 Bridge Street) and couldn't really find anything similar on a brief visit to Kirkwall in July of 1997 but I sure enjoyed the search.

View Large Version
Picture added on 09 June 2009
Related Sites: Kirkwall East Church
Comments:
I find your story really interesting so I hope someone will be able to help you. Please look at picture #3727. Again we see the gents in their aprons.
Added by Barbara on 17 June 2009
<< back