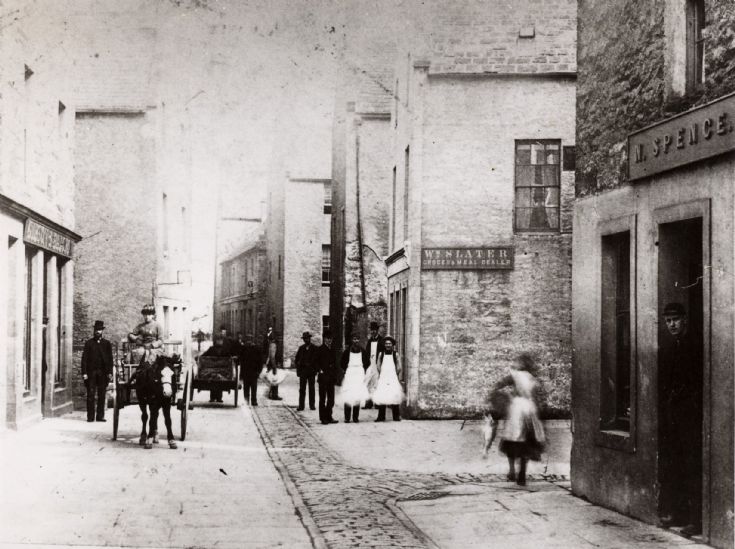 [I've cropped the name out,and image processed it a lot and it seems to say Gibson & Halcrow - Steven]

View Large Version
Picture added on 16 August 2007
Related Sites: Kirkwall East Church
Comments:
Eureka! The old town house of the Traills of Woodwick ("The Gallery") before Garden got his hands on it and turned it into shops. So yes, it's a lot older than the 1920s. But look closely at the people, particularly the woman in the gig, the two men in aprons and the man in Nicol Spence's doorway. Then look at picture #2432. Haven't they been taken on the same occasion?
Added by Paul Sutherland on 21 August 2007
I agree Paul, It would appear that these two photos were taken more or less one after the other. Same lady on same carriage, and the shop assistants are wearing the same hats in each photo.
Added by Rob Thomson on 21 August 2007
There was a building where the Dunfermline is, but the angle of the photo creates the impression that there was a gap. I think the Aberdeen Savings Bank more or less rebuilt it. This was the site of the poorhouse and, before that, St Olaf's Church. A few years ago I saw a very old photo (maybe 1860s) in Tankerness House Museum which may have been of the old poorhouse - I think it was described as that or as a house in Poorhouse Close - but I couldn't figure out exactly where it was. Perhaps some very nice person at the photo archive could upload it (crawl, crawl!).
Added by Paul Sutherland on 22 August 2007
Gibson & Halcrow started trading in 1878 in Harbour Street They moved to Bridge St. in 1885 and were there until 1908 after which they no longer appear in Peace's Almanac and I think that W.T Sinclair moved there from Albert St.until he moved back to Albert St in 1920/21 before finally going to Broad St where the Trustee Savings bank is now
Added by David Partner on 18 November 2015
On the right of this picture there is of course Olaf Wynd,which also contained the building society and savings bank (albeit at different times), also was for a time a shoe shop owned by Mr Turfus who eventually moved to Albert Street.This change would have been sometime in the 1940's I guess,if my old memory serves me correctly
Added by Peter Burges on 09 December 2015
<< back