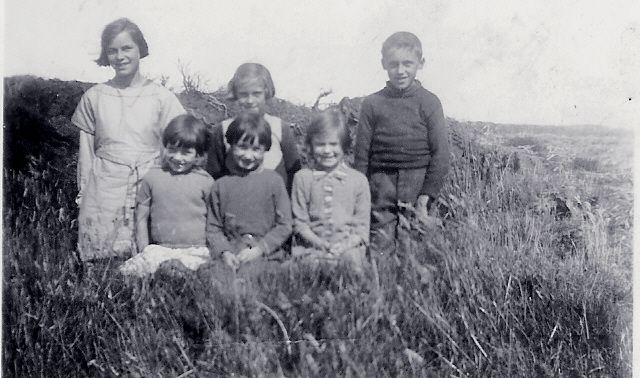 Fara schoolchildren in 1936. Back Mabel Mackay. Ivy Stout. John Stout. Front are the teachers 2 children and then Mabel's sister.

View Large Version
Picture added on 14 December 2006
Comments:
I can't tell you how amazing it was to find the photo above. Mabel Mackay is my aunt - her brother was my father - Charlie Mackay. Sadly he died in 1999 but we have put a plaque in his memory onto the remains of Stoney Ayre on Fara.
Thank you for making my day!
Added by Norma Edwards - nee Mackay on 19 July 2009
This short story was supplied to a former owner of Fara Island in 80's- it makes good reading.

Good Evening to you All by Henrietta Mackay

My father lived at Melsetter, Hoy employed by Moodie Heddle. Wages in those days was very small. They decided they would like to live on the island of Fara. My father got a piece of ground near the shore, surrounded with nothing but peat banks and heather. Father and granddad went across and started to build a house. All the stones were carried from the beach, not a stone being quarried. When they got two rooms completed my mother was taken to her new home. She had never been on the island before. When the door opened for her to go in with a four month’s baby in her arms, the water from the hill came out of the door. She could not keep back the tears and said take me from here as soon as you can but needless to say they went in and settled down and made a very happy home an spent all the rest of their life on the island.

Dad started to dig with a spade to make a croft, then he got a pair of oxen to plough the land and eventually, he had 20 acres. They had 6 milk cows and some young animals. They got a feed in the morning then out on the hill to graze. What lovely milk and butter, the heather made a different flavour besides fed on grass all the time. We have tasted the cream on a basin and it would hold up half a crown, you won’t get half crown now let the cream be ever so thick. We made our own butter and cheese.

However it was very hard to make a living, everything being so cheap to sell. Seeing there was no shop on the island, they decided to start a shop on a small scale.

There was a lot of people on the island at that time but everyone had so little, there could be very little profit made. They had no profit on groceries and all the profit they had was 1/2d on a dozen eggs so they was forced to give it up after a short while.

Then a floating shop started to come around to the islands. It was named the Gleanor. It was sent out from R Garden Kirkwall. It came across the Flow every Monday, called at Fara first. They anchored the big boat and came ashore with a small boat and the people off to get their goods. They had three different compartments, one for groceries, one Draper place and the other brought eggs and sold flour and feeding stuff, so we only got that every Monday so had to think up what we needed for a week. It was all plain cheer and no nonsense.

A new loaf was carefully rolled in a cloth in case any visitors might come along on a Sunday, no such thing as chocolate, biscuits, fancies etc in those days. We had porridge every morning, plenty of milk, then off to school at 9am not home for dinner but got home at 4pm. Oh boy, was we no hungry and did we not enjoy a good tea, roasted sillacks and tattie cutties.

It was a peat fire on the hearth and the sillacks was cooked on a brander and it was teally beautiful. We had no oven at that time, so baked oven scones in a flat bottom pot put on top of pot and coals put on the tin and from 10-15 minutes the scones turned out marvellous.

There being no subsidies and very little pensions then my father had 5 shillings a week and he thought more of that that they do of £5 at the present time. The men folk all went to fishing lobsters then sold at 6d each, not a matter how big they were, but they had to be 9” long or they wasn’t bought at all. Eggs was 6d a dozen, many a basket I have carried across the island of Fara with 20 dozen eggs and would get 10 shillings but at the same time we could get a lot for 10 shillings at that time.

Fara was well provided with peats, we bought no coals, but quite alot of hard work was connected to the peats before we got them to burn, then again we cut a lot of peats and sold to people in Longhope and also to Graemsay. We cut, spread and raised the peats, the carried them to the shore ready for the boats to take them away. For 15 cart loads we got 12 shillings and to any person who only wanted one load they paid 1 shilling and for several years we got 100’s of empty bags sent down from Stromness from Mr terrace; he was the agent for Langland Shipping Company. I see his son Arthur is now in St peter;s house. We filled all those bags with small black peats, it was really like coal, a sloup boat came from Stromness, collected the bags of peats, and they was then sent to London to a distillery for to make whisky, they say that peats make a better flavour on the whisky but I don’t think the flavour takes much effect nowadays, and after all that work we got 3d, the bairns nowadays would not thanks you for 3d to buy sweeties.

When I was young I never got a penny for sweeties unless I looked for a jam jar to sell for a penny, but now you can’t get a jam jar sold, it does seem such a waste to see so many glass jars going in the dust cart.

I went in a butchers shop in Stromness and asked if he had roast mutton, “Oh yes, but it is 10 shillings a lb he says. “Oh boy”, I said “what a price, we have sold many a lamb in Fara running on their four legs and only got 10 shillings”. “Ah but”, he says “it is different days now”- “You’re telling me, and a lot of it no to the better either”.

On the island we had happy days as well as sad ones. We all worked together and we were never happier that when we would go to help our neighbours, but we nevr looked for pay, nor did we get it, all what we had was” thanks and come again”.

In winter we did a lot of knitting our own wool. Spinning and knitting all for 9d a apir of socks.

At one time we had a teacher who belonged to Aberdeen and his wife to Perth. He was teacher, minister and also kept a medical supply- the teaching and the preaching was OK but when it came to the medicine was a different story, the folk thought twice before they took the dose.

I can well remember him preaching, we went to the kirk at 12, he started his sermon with firstly, secondly and on to the seventhly, when we got out it was coming to 3pm. One old man passed out the remark at the door, “boys, its getting dark, after this we’ll need to take a bit of bread in our pocket” We had no organ in the kirk. A presenter started the signing and the minister had a tuning fork and sometimes it was high doh. Everybody that was able went to kirk, old and young, Sunday was Sunday in those days and very strictly kept to.

There were alot of people on the island, six out of ten crofts brought up families from 7- 9, and as soon as they left school they had to go elsewhere to get work as there was nothing on the island for the young, so they left one by one and never returned unless for a holiday. Then it came there was nothing left but the old, eventually the houses became empty one by one, till at last the whole island died out.

I remember when we got the first gramophone with a huge horn- everybody making for the house at night to hear Harry Lauder singing. Then we got a wireless, it was a great attraction- we always got a full house at night to hear Big Ben striking in London. One old man would be coming to the door speaking to himself saying “What a sound, what a sound, what’s the man in the box saying at night”.

It is a great pity to see the island with nobody, after all the hard work our forefathers had on it, brought up their families and lived happily, healthy and contented.

It is really sad to see all the houses going to wrack and ruin and the firlds going back to heather. We felt sorry to leave the island and I never thought than that I would live alone, but I must say I have enjoyed my retired life in Stromness very much. People have been so kind and I have met so many kind friends that have made my life a pleasure, my most grateful thanks to you all.


Added by Richard Evans on 15 December 2013
I will be showing Ivy this photo which includes her brother John also. A very clear photo.
Added by Bill Miller on 06 July 2016
<< back