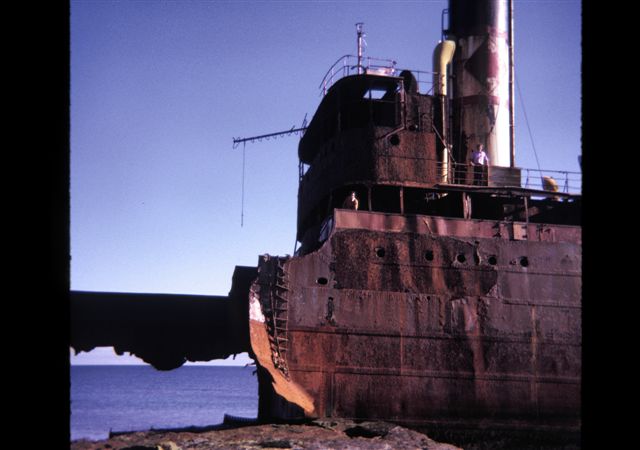 Myself, by the funnel. Eoin Kemp, Greenhall, Deerness, on the lower deck.
Picture added on 07 December 2006
Comments:
I heard at the time that the crew of this ship walked ashore while the lifeboat crew struggled to save them!
Added by Barbara on 08 December 2006
The life boat crew died trying to save the men, if I'm not mistaken
Added by Graeme Spence on 17 March 2007
The crew did walk ashore, with help from local coastguards and the entire brave crew of the Longhope lifeboat were lost
Added by Kevin Heath on 07 April 2007
That night after midnight I tried to drive the coast guard men out to the ship, I dont think they had their oun transport at that time. It was impossible to get over the seceond barrier because of the weather.

Next day I picked up some of the crew from the Royal Hotel and took them out to the Irene where they were able to walk on board with out getting wet, they collected some clothes etc. On the way back they threw underwear, shirts etc out of the Taxi windows as we drove through Burray. They had all been fully kitted out with new clothes from the skin out at Croys Draper shop. and even got shoes from Scotts shoe shop. All compliments of the sea mens mission arranged by Billy Jolly. None of them could speak english as far as I could see. I just could not believe people could be so ungrateful ahd horrible. I will never ever forget that experience. Every time I see the IRENE I think of that day, it was beyound speaking about.
Added by Norma Craigie on 08 April 2007
Can anyone tell me if there is much left of the IRENE because I would like to take a walk down there some time soon. Thanx
Added by Graeme Spence on 08 April 2007
Last time i was there, about 4 years ago there was still a fair amount of a wreckage about
Added by Kevin Heath on 10 April 2007
Whan was the Irene wrecked?
[March 17th 1969. See picture #2060, picture #1433, picture #2231, picture #5173, picture #5175, and picture #6109 - Steven]
Added by Kev Watson on 19 January 2008
hi I am standing I'm SEBOU Redouane I am the son of one crew member of irene my father was a simple sailor Algerian nationality to ships registered in Liberia Greek ss Irene and up to now it is always touch this tragedy and so sick today I want to know the truth and also detailed everything that happened on the night of March 17, 1969 and if possible I would like to know if there archives, photos or a list of crew member of ship ss irene long time and then we seek the truth or to find the site I thank you for help and honor the rescuers who saved my father is and other marine
my e-mail: [email protected]
thank you
Added by Redouane on 09 February 2010
Hi
I was a member of the Deerness Life Saving Apparatus who assisted the South Ronaldsay LSA on that fateful night and i can assure you the crew did not walk ashore they were all taken off by Breeches Bouy. I know this to be true as I was suspended over the cliff on a rope with a searchlight which was kept on each crew member as he came ashore. I believe it to be true that the men were able to walk aboard the Irene the next day but no one could have done so that stormy night. I might add hindsight is a grand thing.

Added by Colin Wylie on 05 March 2010
I remember the Irene from 1968 when it used to haul scrap metal from Great Yarmouth to an Italian port. It used to enter the harbour backwards with a tug at each end. It had its original name in raised letters painted out. I am sorry that its end was linked with the tragic deaths of the lifeboat crew.
Added by NH Richards on 26 May 2010
That name was something like Pres Emile Marchese if I remember correctly
Added by Eddie Fraser on 01 June 2010
This is quite an old thread, but following the 50th anniversary of the tragic deaths of the lifeboat crew I thought I would add some clarity to the story. I am the son of one of the crew of the SS IRENE and I can tell you that the crew were eternally grateful for both the sacrifice of the RNLI volunteers and the hospitality received from the local people. My father (who could speak English) was completely devastated by the loss of life, and even though the sea was his passion he gave up seafaring because of this terrible event and returned to his home in Liverpool.

The details are now quite well documented on a number of sites, but the following extract is taken from the shipsnostalga.com website and provides a lot of detail.

The TGB unfortunately came to a very sad end as on 17th March 1969, when the lifeboat capsized while on service to the Liberian vessel 'Irene' and her entire crew of eight lost their lives. On the evening of the 17th of March 1969 at 7.29 pm, the Coastguard telephoned Jackie Groat (Hon Sec) to say that the Liberian registered, Greek owned ship SS ‘Irene’ was in difficulties 21 miles East of Duncansby Head, later she was found to be to the South of Old Head South Ronaldsay.

The Longhope Lifeboat ‘TGB’ was launched from Brims at 8.00pm in a force 9 south-easterly gale which had been blowing for several days turning the Pentland Firth extremely rough, visibility was also reduced owing to heavy rain and snow showers.

At 9.07pm the ‘TGB’ radioed the Coastguard telling them that they were 1 mile east of Swona.

At 9.15pm the SS ‘Irene’ was driven ashore by the south-easterly gale about ½ a mile from Grimness South Ronaldsay, the position was radioed to the ‘TGB’ and was acknowledged at 9.28pm, that was to be the last message received from the “Longhope Lifeboat ‘TGB’.

Wick radio called the ‘TGB’ at 10.10pm there was no reply, and so they repeated the message every five minutes.

By this time the ‘Irene’ was hard aground on the beach near Grimness and Coastguards had managed to save the entire crew of the stricken vessel with breeches- buoy from the land side.

At 10.30pm there was still no reply from the ‘TGB’ and the Coastguards started to fear the worst, the Kirkwall Lifeboat ‘Grace Paterson Ritchie’ (a 70 ft Clyde) which was also on service to the SS ‘Irene’ was asked to search an area from Grimness to 1 mile East of the Old Head, South Ronaldsay, they did so without success and had to seek shelter due to the sea conditions.

At first light on the 18th of March a massive search was mounted, which involved the lifeboat’s from Kirkwall, Stronsay, Stromness and Thurso, with assistance of a helicopter from RAF Lossiemouth and a Shackelton aircraft from RAF Kinloss.

Not one of the seven Lifeboat men onboard the ‘TGB’ had survived, with the body of the eighth Lifeboat man (Assistant Mechanic James Swanson) missing.

On the 9th of August 1970, HRH Queen Elizabeth the Queen Mother unveiled a memorial plaque in the Walls Old Church (now St Columba’s) and a statue memorial of a cast bronze Lifeboat man looking out to sea, on a stone plinth, in Osmondwall church yard.

There is also an inscription below the names:-

Greater love hath no man than this, that he lay down his life for his fellow men

I will be forever indebted to the RNLI Lifeboat crew and the coastguard for their heroic actions that day.
Added by Markos Tiris on 29 August 2019
<< back