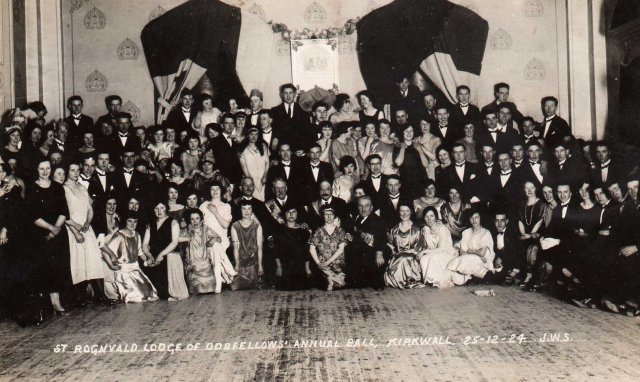 Paul writes:
"Kirkwall Oddfellows' Annual Ball in the Town Hall, Christmas 1924. The Oddfellows were a fraternal and friendly society which offered its members fellowship and a certain amount of ritual combined with benefits such as health insurance. They largely died out after the NHS came in, but I believe they survive in a small way in parts of England. Of the four men in sashes in the middle near the front, the one on the left is my great-grandfather James Flett, while his daughter Ella is the woman in the head band kneeling on front of the third one along. At the back just to the left of the right-hand alcove, smiling and chatting to her neighbour, is Ina Hercus."

[Administrator notes: Observe the preview of the new 'larger version' facility under this picture- you'll be seeing more of this...]