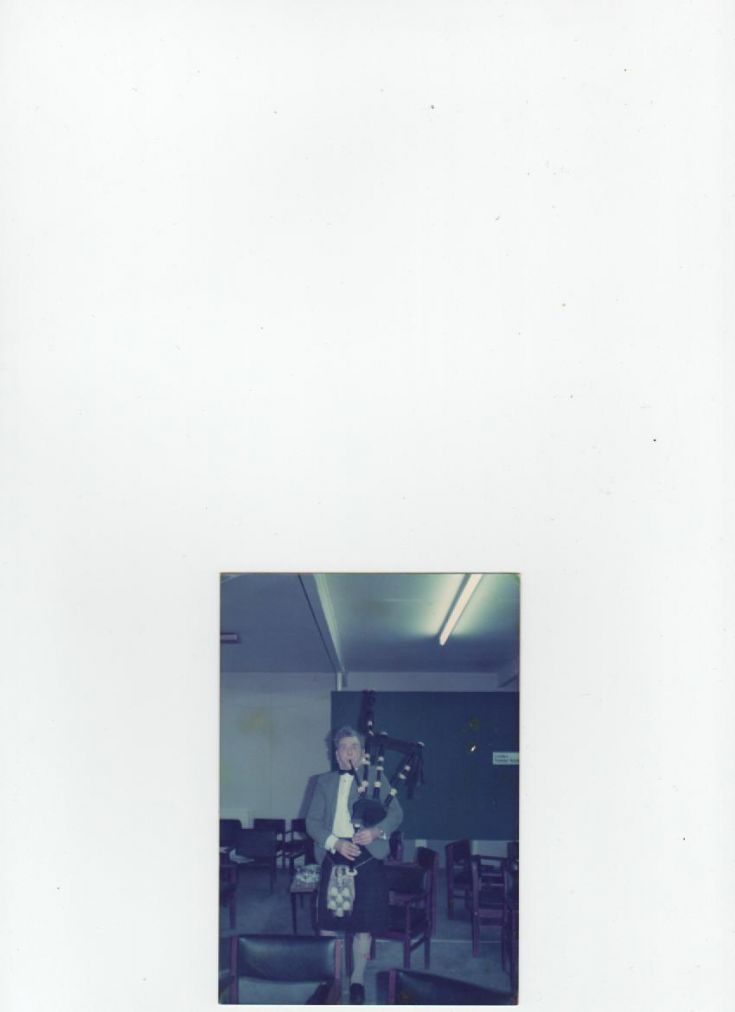 Mac Robertson grew up on Flotta and worked on farms in Longhope. As a young man he joined the Army with the Seaforth Highlanders, becoming a piper( Major??) and was part of 'The Forgotten Army' as they were to be called after the war.

Mac was captured at St Valery and marched to a prison camp in the north of Poland only having transport for two parts of a days he told. He spent the rest of the War in prison, conditions were very poor until the Red Cross got some aid to the men as Mac would explain.

On his return to his home on Flotta after the war he took on a croft and worked on the roads or fished, Mac was a hard working man who had a lot of misfortune in his life.

None of this seemed to change Mac who was never bitter, Mac liked nothing more than a dram and a tune on the pipes.

As the oil industry arrived to Flotta Mac and his family gained some fortune as Mac owned Stanger Head, most of the stone for the terminal comming from his land.

Mac died a few years ago having lived a hard life but was one of Orkneys best loved sons.

View Large Version
Picture added on 04 July 2008
Comments:
Mac Robertson was a relation of mine. (Dads cousin I think) My Dad tells me interesting tales of Mac. Mum and Dad were on Flotta when Mac took them trout fishing in the quarry. Tied a worm to a hook, walked around the far side of the quarry and mum reeled the line in. Caught a trout on each an every trawl. I tried fishing the quarry recently and caught a cold!. Dad had his shotgun with him with a view to getting some rabbits for the pot. A bird flew overhead which Dad didn't recognise. He asked Mac what it was and the reply was "That's a rare un....shoot it!" It sound like he was a proper character. Its good to put a face to the stories.
Added by Stuart Flett on 04 July 2008
Yep, he was a pipe major with the Argyle and southern highlanders John, his medals are on display in the Flotta museum. He never spoke of WWII very much except I remember he said that one time they were sent in with rifles to fight against enemy tanks and aircraft, on that occasion he lost part of his thumb due to enemy shrapnel, his main concern about that was thinking that he might not be able to play the bagpipes again, but with practice he managed. Thank you for your kind words about my father John.
Added by Brian on 05 July 2008
<< back