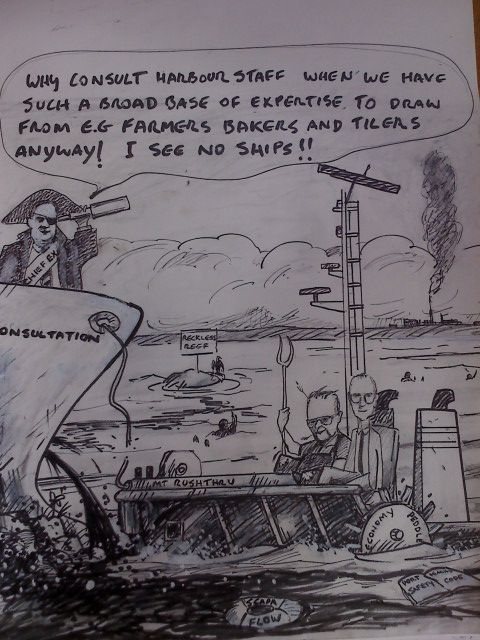 Just a funny cartoon- make your own mind up !

[Come on guys, you are putting me in a difficult situation submitting pictures like these! But to show how uncensorious I am, I'll publish it, but also list below the OIC press release from 26/3/08 to give both sides of the story- Steven Heddle]

We would wish to clarify once and for all that we have fulfilled every aspect of the statutory consultation requirements defined in the Port Marine Safety Code (PMSC) and that safety has and always will be our top priority. PMSC’s requirements for consultation are based on ascertaining if changes will reduce the safety of the port, not its profitability.

The Council introduced a safety management system to meet the requirements of the PMSC code in 2002, and in the current situation of proposed operational change, all stakeholders have been consulted on the following basis:

- OIC currently provides a pilotage service of three pilots available for up to 12 hours per 24 hours period. Discussions were held with the operator of Flotta Oil Terminal from an early stage on the new pilotage arrangement which proposed two pilots to be available instead of three. They raised no objections.

- The harbour authority has discussed with ship owners such as Fred Olsen and Norwegian Cruise Lines who operate Cruise Liners to Kirkwall the likely implications of the proposed changes and they had no objections.

- The three crew on OIC pilot launches will remain unchanged and provide pilots with the same standard of service they currently receive. The restructuring will not effect service provision or safety for either pilots, launch crew or other stakeholders.

- Orkney Towage provides a service to the Council, as defined under a service level agreement. The service consists of three tugs supporting shipping to the Flotta Oil Terminal, and others within Scapa Flow. This provision will not change.

- The seaworthiness of tugs operated by Orkney Towage is demonstrated by the various legal certificates provided by the MCA and Classification Societies. Orkney Towage voluntarily established a safety management system in line with the International Safety Management Code. Orkney Towage successfully completed its Document of Compliance audit recently, demonstrating that its safety management system, which incorporates four man manning within harbour limits, is compliant with safety requirements. Five man manning will remain an option under certain operational conditions.

- Prior to the introduction of this level of manning a range of risk assessments, both internal and independent, were undertaken, consulting with a range of stake holders including, tug crews, pilots, VTS( Vessel traffic service [port control]) officers.

- The changes proposed for Marine Pilots, Pilot launch crews and storekeepers will not alter the standard of service provision, nor the safety of staff, stakeholders or the environment. The manning level on tugs was the subject of a formal risk assessment including consultation in line with the ISM code.

In addition the Council has carried out more than double the minimum 30 days’ consultation required by the Scottish Government for this level of operational change with formal and informal consultation with towage and harbours staff involved and local and regional Union representatives since before Christmas 2007.

As a direct result of this intensive consultation process, four jobs have been saved in Towage and two jobs in Harbours.

Due to the loss of the Foinaven contract, Orkney Towage is set to lose £1.3m a year revenue and Orkney Harbours £1.7m a year. In addition there will be up to a 60% reduction in workload. Over the four years since 2004 Orkney Towage Company’s annual accounts show accumulated losses of £1.1M.

Crew costs make up a significant part of the Orkney Towage company operating costs - at 64% of the cost of sales - and have also increased by 28% since 2004.

All this has led to an urgent need to change the way we work and we are confident that our statutory and moral obligations as a Council have been and will continue to be fully met."