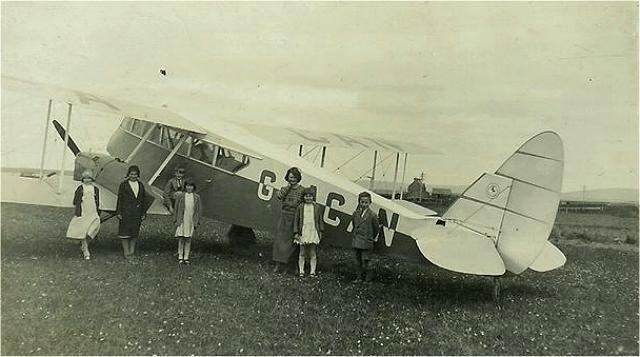 Willie writes:
"This is a photo of my mother with Gander Dower's plane. She is on the far left. The house in the background is the Brigend on the Brig o Waith. It was Gander Dower's test flight to find suitable airfields in 1936. It was used until the war broke out. German intelligence knew an airfield existed there and this could be the reason why the Brig o' Waith houses were bombed early in the war resulting in the first civilian, James Isbister, to be killed on British soil during the war."

When Willie sent this in I was initially a bit sceptical of the name Gander Dower, thinking it a play on 'gandered ower', but Google reveals that Gander led quite a life- see the following excerpt re The New Guinea Expedition:
"Gander Dower, the financial partner behind this extraordinary venture, had profited from gifts bestowed on him since birth. 'A few times millionaire' according to Tom Harrisson. He was a historian. He flew his own plane solo over long distances, to such places as Madras - not a normal safe occupation in the 1930s; he had spent much time in Africa searching for a spotted lion and written a book about his quest. He represented Cambridge in six games and had an international reputation as an athlete. He would be a valuable member of the expedition."

From 'Jock Marshall: One Armed Warrior' by Jane Marshall

View Large Version
Picture added on 01 September 2005
Comments:
This plane was a De-Haviland Dragon and crashed in Caithness in 21 May 1941. An excerpt from the Orcadian dated 3/4/2003:

"On Thursday evening, April 29, 1937, a call came from the Commissioners for the Northern Lighthouses in Edinburgh, asking Aberdeen Airways if they could fly a dangerously ill lighthouseman from Esha Ness at the north-west tip of Shetland’s mainland, to hospital in Edinburgh. On being told that Sumburgh (on the southern tip of Shetland) was the nearest aerodrome, the Commissioners said that the man could not be moved any distance, and asked if the airline could try a small field close by the lighthouse. At 07.40 on Friday morning (April 30) therefore, Henry Vallance set out from Thurso in the Dragon G-ACAN, and flew the 150 miles to the northern tip of Shetland. "

Added by W Watters on 02 September 2005
The African adventurer described above is Kenneth Cecil Gander Dower. Aberdeen Airways was founded by his elder brother Eric Leslie Gander Dower (in 1937 the airline was renamed as Allied Airways (Gander Dower) Ltd.
So it is Eric Gander Dower who is your name for this photograph, not Kenneth.
Added by Iain Hutchison on 20 March 2007
I met I think Eric Gander Dower in Wick about 1946/47. I was over as a passenger on the Longhope Lifeboat, which was in Wick to swing the compass etc. He was standing as a candidate for the Tory party in Caithness, but wasted a lot of breath trying to convert the Brims men who wouldn't have been allowed to vote for him anyway.
Added by Fred Johnston on 23 October 2009
Having just come across this interesting thread, I'm very late with my comment - which is just to point out that the name painted on the side of at least some of the aircraft was spelt Gandar, not Gander. There seems to have been some confusion even within the family itself over how to spell it, but I think the 'a' form predominates.
Added by Ian Hourston on 28 May 2011
You are correct, Ian. I knew this so cannot explain my slip in my post of 20 March 2007. On his flying licence it was shown as GandĂ r-Dower.
Added by Iain Hutchison on 28 May 2011
The remaining aircraft owned by Gander Dower were housed in a hanger and unused at the Dyce RAF base throughout (I think) WW2. As young boys we used to look in the windows of the hanger and there was a DH Rapide and some smaller planes, one of which had folded wings and was reputed to be his "secretary's". I have no idea what happened to them, or indeed the hanger they were in. James Sey, (originally from Bankhead)
Added by James Sey on 28 April 2012
Our airline entrepreneur in Orkney was Eric Gandar Dower. The intrepdid explorer to India etc was a different character, namely Kenneth Gandar Dower. Iain
Added by Iain on 03 May 2012
The Rapide that remained in the hangar at Aberdeen until c.1967 is G-ADAH and this is now displayed at the Museum of Science and Industry, Manchester, having previously be at the Museum of Flight, East Fortune. G-AIDL, also one of Gandar Dower's Rapides, is airworthy and operated by Air Atlantique's Classic Flight.
Added by Iain on 07 May 2012
G-AIDL later belonged to my Grandfather, Eric Fox, of Fox's Glacier Mints. I first flew in her in a carrycot in May 1952 aged 13 weeks
Added by Richard Fox on 02 July 2014
Just found this site when researching the life of my grandfather Alexander MacRae. He was the patient involved in the airlift from Eshaness lighthouse in 1937. There was no airfield, just a strip of comparatively even ground marked out by my father, my aunt and another keeper. It wasn't an easy landing or take-off. As the pilot, Henry Vallance later said "The Dragon left the ground but in reality it was still flying horizontally and not gaining altitude at all at first. It was the sloping ground that was leaving the aircraft, not the other way around!"
Added by Alistair MacRae on 29 May 2020
I am researching the airfields and landing sites in the Orkneys. From the Scotsman Newspaper dated 13 May 1935 page 13 a new service to Stromness will open on Monday 27 May 1935. The landing field for Stromness used by Gandar Dower was at Howe; the photograph shows the aircraft in the top field and was taken looking easterly. This does not tie in with your 1936 date for a test flight to recce landing sites when the service started in 1935; you are implying this was his first landing at Howe. Would appreciate it if you clarified your statement. Gandar Dower also used Cumminess to the south of Bridge of Waith; do you know how long he used that site - there is photo on this web site with an aircraft at Cumminess.
Added by Michael Holder on 06 July 2020
The info came from my mother who was born in 1924. The house in the background is Bridgend and the field is between Howe and Bridgend to the south of the road. She died 5 years ago but I can ask my uncle who is on the far right of the picture. He is still with us and still able to remember most facts.
Added by W Watters on 08 July 2020
Do you know that the Orcadian Bookshop sells the books of Peter V Clegg - Airfields of the Orkney Mainland and Airfields of the Outer Islands? There are other ones available with Caithness, Western Isles etc.
Added by Sylvia Leonard on 13 July 2020
Many thanks for the replies. I have discovered from another source that Howe was used for North/South landings and take offs, and Cumminess for East/West landings and take offs because of telephone wires at Howe. When the lines were buried operations were all from Howe. Sylvia - please send prices and p & p charges - to m.holder50@btinternet.com
Added by Mike Holder on 15 July 2020
Mike have tried to email you but if you log on The Orcadian Web page and select Bookshop link they should be able to help you.
Anonymous comment added on 19 July 2020
That was me on anonymous comment. I seem to have a bit of bother with your email address. Sorry
Added by Sylvia Leonard on 19 July 2020
Thank you Sylvia; all is resolved - I bought Peter Clegg's book and Fresson's book from the Orcadian Bookshop and have the answers I need.
Added by Michael Holder on 21 August 2020
<< back