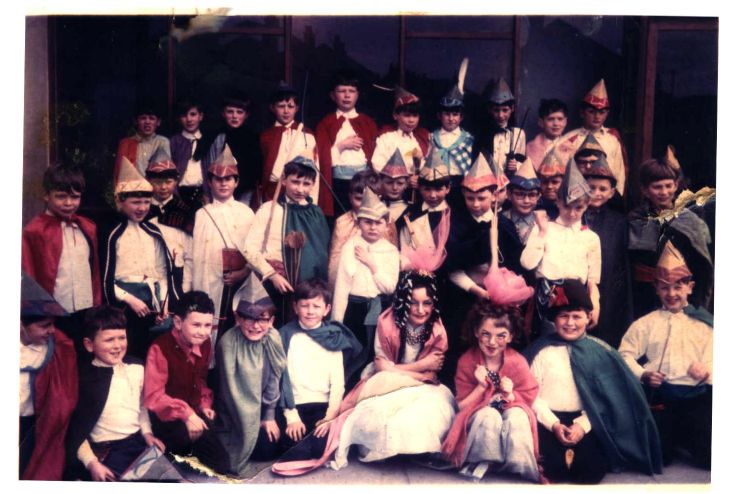 My brother Charlie's school concert photo. I could have a guess at some of the class but I think I'll leave it to someone else to get it right. I think the date is about right.

View Large Version
Picture added on 22 February 2008
Related Sites: Kirkwall East Church
Comments:
Wow! I'd forgotten all about this. I do, now, thanks to this, remember the hat! My memory has kind of faded, but most of the folk I do recall. However, sincere apologies if I've got your names wrong, and if you are a "?". Here goes:
back row: Ronald Norquoy, Kelvin Baikie, Clive Miller, John Brodie, Alan Brough, Kenneth Adams, Derek Harcus, Colin Anderson, ?, ?.
Second from back row: Eric Donaldson, Kenneth McGillivray, Derek Thompson, Steven Rorie, Lawrence Celli, don't know cos you only can see half o'him, Brian Johnston, Bruce Flett, Kevin King, ?, David Glass, ?, Douglas Swanney, ?, Colin Taylor.

Anonymous comment added on 24 February 2008
Charlie is far right at the back.
Added by Lyndon on 27 February 2008
Front row missing names from left are Angus Kostum, David Vesco, Ricky Thomson
Anonymous comment added on 27 February 2008
Oh i forgot to mention the year is no later than 1969 as our dear friend Kenny McGillvray was tragically taken from us in that year
Added by Charlie on 28 February 2008
thanks for not printing my earlier comment now you have got everybody thinking i have named the photo (WRONGLY)
[Eh? - If a comment hasn't come through try again. Cheers, Steven]
Added by Charlie on 29 February 2008
I think that's Mark Headley, second row, second from far right, next to Colin Taylor, behind Douglas Swanney. And could that be Donald Gunn behind Mark? p.s. can't remember if he is Mark or Marc! Marc seems to ring a bell! Or maybe that's a Bolan!
Anonymous comment added on 02 March 2008
my comment you failed to print was that i can name all the people in this photo (because there are a couple of mistakes) but you know what they say about keeping fools in suspense, ha! ha!
Added by Charlie on 05 March 2008
I'm fairly sure that the front row features Angus Konstam (6 from the left, first ? in the first comment) and the second row has Greig Tulloch (who is labelled as Lawrence Celli in the first comment). Charlie Sinclair, I think, is right end of the back row and I'm next to him (without the hat).

This must have been more than one class as some of the faces are very unfamiliar to me and there are no girls in the picture... could it have been end of summer term 1969?
Added by John Sinclair on 26 March 2008
No girls apart from me an' David Vesco of course - the two pantomime dames!
Added by Angus Konstam on 06 May 2008
Eoin Cowie is behind Brian Johnson. Where is Eoin now? he moved to Wick after P7

"tally ho tally ho the hunt is on" comes to mind not sure what the panto was about.
Added by Chris on 13 October 2008
Hi,
This is Eoin Cowie
Good to see this picture again. I have lost touch with everyone but Chris was my best friend and I have fond memories of the folk in this picture. I moved to Wick and then Inverness. I now live in Aberdeen and teach at RGU, mainly microbiology. If anyone in the class are looking at this, very good wishes to you. all the best, Eoin
Added by Eoin on 27 September 2009
hi, to all my class mates of P7, it is wonderful to see all the faces I grew up with, I now live near Banchory, Aberdeenshire. I have only ever seen Colin King a couple of times & many moons ago I met Alistair Whyte in Aberdeen. I dont get back home very often as I should. As I read the messages above some of the memories come flooding back with each & every name I read. It would be great to here from some of you guys.
Added by Kelvin Baikie on 09 October 2009
<< back