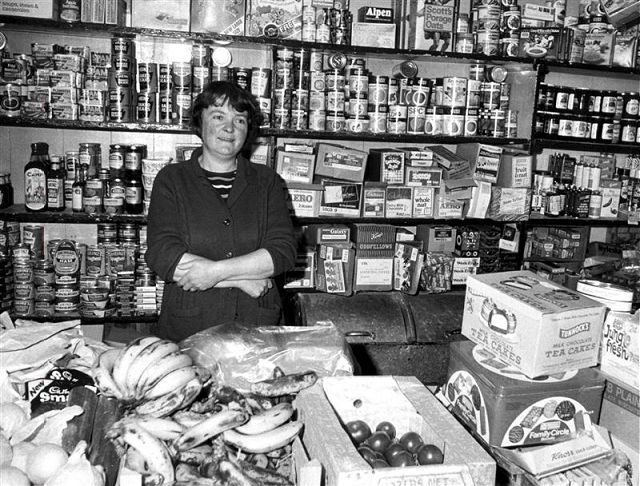 The shop at Hullion, Rousay

'This is a picture I took in 1975 of Edith Gibson behind the counter of the shop at Hullion, Rousay which she ran with her husband David. Many years before the shop and post office was run by John Craigie but when he was declared bankrupt James Sinclair of nearby Newhouse bought it for his daughter Anne and her husband David Gibson [1844 - 1920]. Later their son James ran the shop and he operated a horse-drawn van which travelled to the Sourin and Wester districts of Rousay on separate days once a week. Edith [pictured] was married to another son, also called David, but the shop finally closed following David's death in 1990. It had been in business for at least 150 years, under the ownership of the Craigies and Gibsons.'

View Large Version
Picture added on 09 June 2005
Comments:
Does this shop still exist? I thought there was only Marion's shop on Rousay now.
Added by David on 29 January 2007
No, it's a house now. What was the shop area is now the kitchen
Anonymous comment added on 29 January 2007
Thanks for letting me know. Btw, do you know what the old buildings at Pow, Sourin, Rousay are and their dates?
Added by David on 31 January 2007
David - For all things Rousay, visit Robert C Marwick's Rousay Roots website - www.rousayroots.com
Added by Max Fletcher on 31 January 2007
Hi thanks for that. Do you know if the people listed on the website that lived/died at Pow are from Pow on Rousay or one of the other islands?
Added by David on 31 January 2007
John Craigie was my Great Great Grandfather but I've never heard the story about him going bankrupt. I'm not saying it's wrong - but I've never heard it before.
Added by Whassigo on 01 February 2007
Whassigo - I can only repeat the source of information for my caption to the above pic was gleaned from RCM's excellent 'Rousay Roots' publication.
Added by Max Fletcher on 02 February 2007
David - Re: Pow, Sourin. According to Rousay census returns [1841-1901] Pow was occupied by members of the Gibson/Stevenson family. They are all interred in the Scockness kirkyard. Again I urge you to visit www.rousayroots.com. See entries under B259 James Stevenson and B263 his daughter Rebekkah who married John Gibson of Pow; and also Scockness kirkyard inscriptions 59 & 60.
Added by Max Fletcher on 02 February 2007
Yes - I'd be careful about taking Rousay Roots as if it's "gospel". It is an excellent guide and I have the greatest respect for RCM (after all he is a far off relation of mine) but who did or didn't go bankrupt more than a hundred years ago is more likely to be based on island gossip as opposed to fact. It could well be true but I've never heard it before and so I'm compelled to jump to the defence of my (long dead) relations.
Added by Whassigo on 02 February 2007
thanks for that. :-)
I don't supose you know where I can see old photos of Pow, Sourin, Rousay?
Added by David on 05 February 2007
David - Yes! The Orkney Library & Archive. Go to www.orkneylibrary.org.uk. Click on Archives on the homepage; at the bottom of that page you have the ability to contact the Photographic Archivist who should be able to help you with your request.
Added by Max Fletcher on 05 February 2007
Hi

I tried them, but they don't have any photos of Pow.
Added by David on 13 February 2007
the photo is ace, innit?
Added by Gillian Muir on 13 April 2008
We are trying to trace direct decendants of James S. Gibson Jnr. who left Houllion. Rousay. Orknay for Australia December 1929. Possibly lived in Preston, Victoria Australia after arriving from the Orknay Isles. Possibly early 1930's.
Added by Neil & Dawn McIntosh, Victoria. Australia on 28 July 2008
At Christmass time upstairs in the shop was the big room filled with toys. I mind it well.
Added by Adele Park on 04 September 2011
<< back