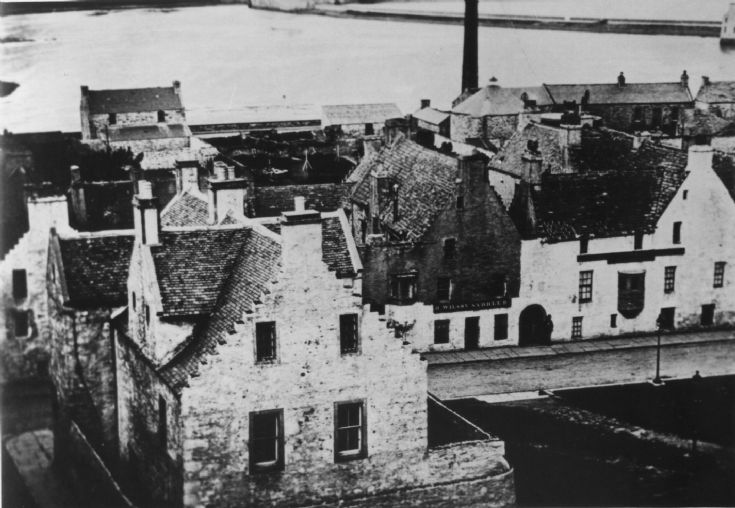 I found this among my late Dad's photos, and I've absolutely no idea where it is!

The sign above the one building says "H. Wilson, Saddler".

Is it Broad Street? With one of the set of steps down from the Kirk Green visible, and the Peedie Sea in the background?

I'm ashamed I don't know this, because - even though it's waaaaaaaaaaay before my time - I should be able to pick out bits of Kirkwall!

[Steven writes- It's Kirkwall right enough, and I got quite excited when I saw this picture, as it is a really old one taken from the top of the Moosie Tooer, showing the Old Town Hall/Tolbooth/Jail/Masonic Hall in the foreground and what looks like an old town house where Tait's buildings and the 'new' Town Hall now stand. I asked Paul Sutherland to suggest a date and he responded:

"It's a splendid photo and you're right - it is the Old Town Hall/Tolbooth seen from the Bishop's Palace. I have actually seen the photo before for it is in Noel Hill and Caroline Budge's "Orkney - A Photographic History". Gordon Wright's "Orkney from Old Photographs" (recently republished) has a photo of the building where Tait's is being demolished. Both it and the one on the site of the present Town Hall were built in the 17th century and Hossack has quite a bit about the people who built them and lived in them over the centuries. At the time of this photo the one on the right was James Adamson's Temperance Hotel. Both had oriel windows overhanging the pavement. The one on the right seems to have something written on it, probably a sign for the hotel, but I can't make it out. As for the date, certainly no later than 1884, probably no later than 1883, for the hotel had moved to the big house behind what is now Groundwater's shop in Albert Street by the end of that year, but how long before that I wouldn't know. The former Hydro Showroom in Junction Road looks quite new in the photo, but it is shown in the 1880 OS map. Now why couldn't they have demolished OTE to build the Town Hall?" ]

View Large Version
Picture added on 04 September 2007
Related Sites: Kirkwall East Church
Comments:
The saddler's shop belonged to my great great great grandfather, Henry Wilson.
Added by Jackie Harrison on 05 September 2007
Cousins William and James Tait started their business of J & W tait in 1869 but I don't know whether they were in business on Broad Street from that date or moved there later on. James was certainly living at 8 Broad Street on the 1881 Census and had moved to 29 Broad Street by 1891.
Added by Marion Mcleod on 05 September 2007
Does anyone have more information on James Adamson, who owned the Temperance Hotel? He adopted my great great grandmother Jessie Milne
Added by Lorna Brown on 23 June 2010
I now think this must be a fair bit before 1883, as in another picture for 1883 (picture #17896) there is no Town Hall, as is consistent with its date of 1884, but Tait's Building is present where H Wilson Saddler stands here.
Added by Steven Heddle on 08 December 2011
The earliest Trades Directories in Peace's Almanacs (1868 - 1940) start in 1873 and Henry is listed in Broad Street. Perhaps the Valuation Rolls will give the date he first started. In 1880 he is listed as being in Victoria Street where he remains until 1891 and he is not listed in 1892. This photo must thus predate 1880.
Added by David Partner on 11 January 2016
<< back