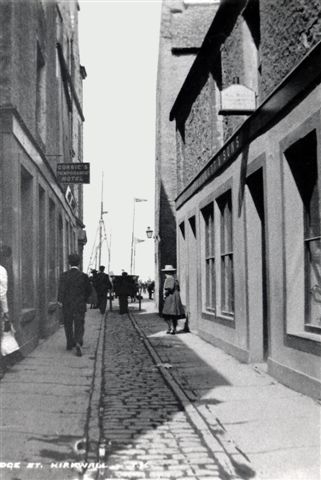 Looking down Bridge Street to the pier

Peter writes:
'This picture, by the late T.K., will be of particular interest to all at orkneycommunities. On the right is the Anchor Buildings (as was) and very prominent on the left is Mrs Corsie's Temperance Hotel. Note also the cobbles in the middle of the street.'

Orkneycommunities.co.uk operates out of the modern day Anchor Buildings. Date is an estimate.

Looking out of the window, Corsies Temperance Hotel looks to have been where Scotts Fish Shop was and the Harbour Fry is, also where the Leitche's greengrocers/The Ship Inn/Mumtaz restuarant was and Eastern Spice is. Thanks to Mark Rendall for historic Bridge Street information.

View Large Version
Picture added on 25 November 2004
Comments:
My grandfather, George Moodie, (born 1860 in Kirkwall) gave his address as Bridge Street Lane, Kirkwall on his enlistment papers when he joined the armed forces in Canada in 1916. Would this be the same Bridge Street?
Added by Georgina Wilson on 27 January 2007
Yes Georgina, this is the same Bridge Street, but to see the area of Bridge Street Lane you have to be looking UP Bridge Street and turn left at the top.
See my picture #1682.
Added by Peter Burges on 08 September 2008
A correction for George Moodie's birthdate - he was born in 1890, not 1860!
Added by Laura Wilson on 09 September 2008
<< back