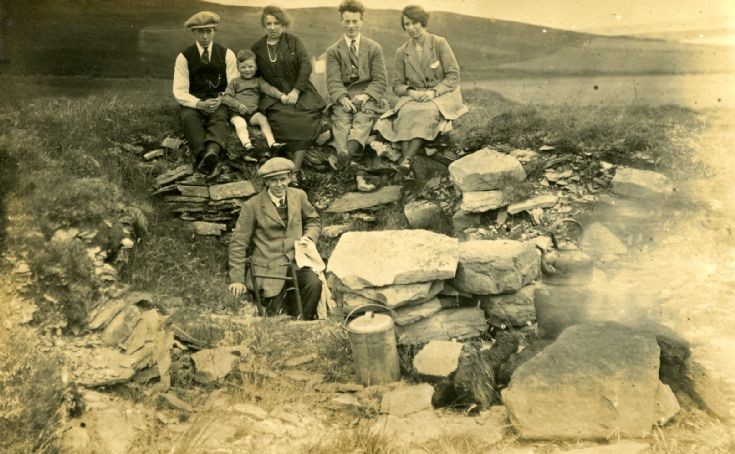 Discovery of the Broch of Gurness

1929 Photo taken when Robert Rendall (Poet) discovered The Broch of Gurness. He was painting when the leg of his stool sank into the mound and with more examination he could see the staircase leading down below. Robert is standing on the ladder at the front, the rest of the people in the photo are from the left my father also Robert Rendall (Bertie) Bobby Leggat, Jean Leggat, sister of Maisie, Uncle John Laughton and Maisie Rendall wife of William Rendall Roberts brother. Must have been out for a picnic.
Picture added on 26 March 2013 at 23:44
Related Sites: Orkney Youth Football
Comments:
Hi, my mother, May Rendall b 1927 says her father probably took the photo as her mother Maisie is sat next to Uncle John. However, she is not sure who the little boy is as Bobby leggat was born 1920 and her brother Bertie not until 1931. However she does think it looks like Bobby and certainly not her brother Bertie. Your father, Jean, to the far left of the photo, who is he? My mum is unsure. So lovely of you to share this photo. Thanks!
Added by Sheila Roberts on 06 April 2013
<< back