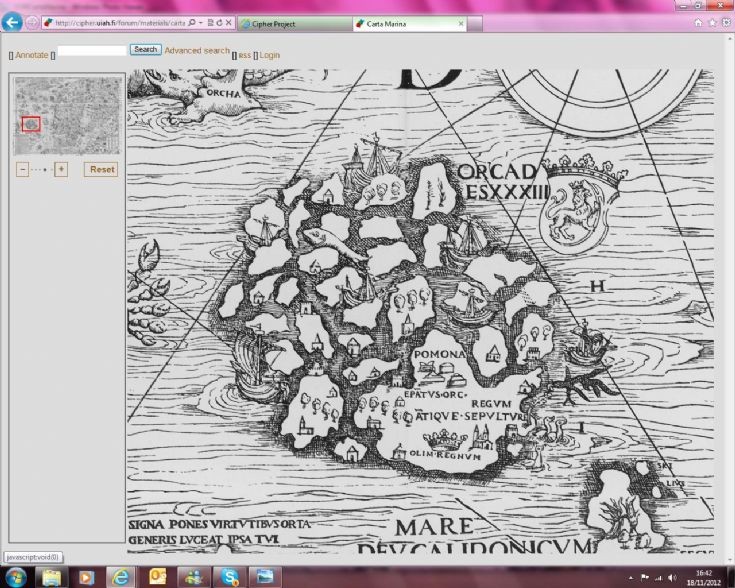 Orkney depicted in the Carta Marina of 1539. Interesting to see that the cartographer had visited Orkney and seen the gloup at Deerness which is shown on the east side of the Mainland, called Pomona on this map, together with the seals. Interesting to see the two other gloups depicted on a northern island. Can anyone identify any of the other landmarks, obviously placed by memory as the islands are not accurately depicted?

View Large Version
Picture added on 17 December 2012 at 22:44
Comments:
I also think the islands of Hoy and Walls seem accurate too, as at that time Hoy had a chapel of Our Lady in the south, and the palace shown in the north could be that mysterious building known as The Bu of Hoy, which shows as the House of Hoy in subsequent old maps. I believe that the house shown on South Walls was Snelsetter Castle. I think other landmarks that would have existed at that time can also possibly be identified, such as Langskaill House on Westray, The chapel of Our Lady at Rousay, St Magnus church on Egilsay, Langskaill Castle on Gairsay, two early buildings on Shapinsay, Cubby Roo's castle on Wyre, the New Work of Deerness opposite Copinsay, the chapel of Our Lady at Deerness, etc. I'd be interested to hear what anyone else thinks.