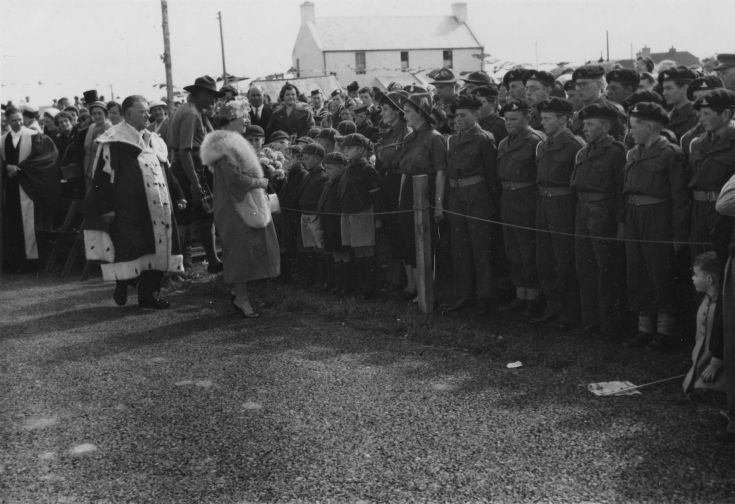 HM Queen Elizabeth the Queen Mother inspected the uniformed organisations before the official opening. Here she is seen talking to the cub-mistresses Baloo (Barbara Major/Drever) and Bagheera (Jean Moncrieff). Angie Campbell (was he Akela then?) is standing behind them. They are all wearing scout hats of the original design. The Orkney Scout Commissioner at the time (Pat Scott) is visible between Provost Scott and the Queen Mother. The Town Clerk (Mr Wood?), wearing a gown, is at the extreme left of the frame. I can see Arthur Flett in his BB uniform, and no doubt others will be recognisable, especially in the ranks of the TA, although unknown to me.

The three cubs whose faces are visible are those of myself, Dougie Lloyd and Roy Jezek. The Queen Mother had just spoken to me. We had been told to face front and stand to attention so I stood there ramrod rigid facing her coat buttons as I told her my age and that I liked the cubs.

The photo was taken and published by James W Sinclair.

View Large Version
Picture added on 12 September 2011 at 12:09
Related Sites: Kirkwall East Church
Comments:
It's not Provost Scott, I think it is Provost Flett. The couple on the right of the Queen Mother look like Frank and Thora McGinn.
Added by Louise Cormack on 13 September 2011
I don't think it is Douglas Wood but Willie Groat
Super photo.
Added by Barbara Jolly Watt on 14 September 2011
I agree on Willie Groat far left. BB Officer next to Arthur Flett is I think Tommy Scott (and maybe his brother Jim next to him?).
Added by Ian M Gibson on 20 September 2011
It was the opening of George V Playing Fields, not George VI
Added by Barbara Hiddleston on 18 January 2013
<< back