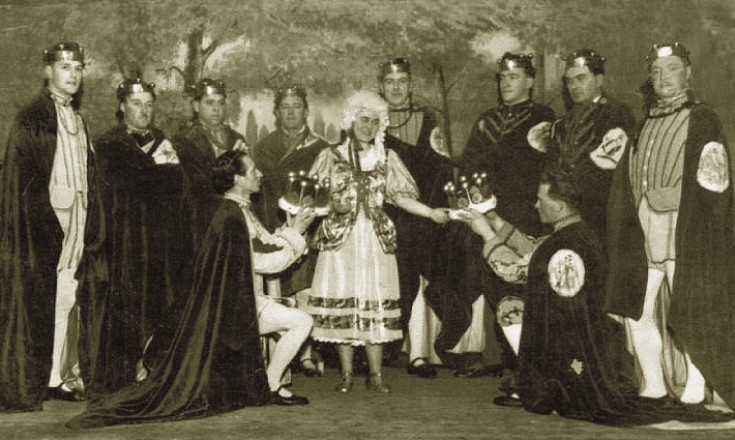 An attempt to clean up picture #24925 a little. In particular I tried to get that black hat off the leading lady, and end her brave pioneering attempt to start Red Nose Day several decades too early. I doubt she will be any more recognisable as a result. Somehow the gent on the right seems to have wound up with glasses, which he didn't have in the original, but probably would have had at some later stage. Obviously, you can't get a good result from so few pixels - and if it's important to its owner I'm happy to have a another go from a better scan - but at least the lady looks a bit more human.

View Large Version
Picture added on 18 April 2011 at 11:07
Related Sites: Kirkwall East Church
Comments:
could the leading lady be sheena Marr? Billy Jolly Snr 2nd left?
Added by Margaret Hinckley on 19 April 2011
When tidying-up this pic, I swithered over whether the 2nd-from-left man's Chaplinesque moustache was real or just a blemish on the photo. I decided it was probably real, but no doubt someone will know for sure.
Added by Ian Hourston on 21 April 2011
<< back