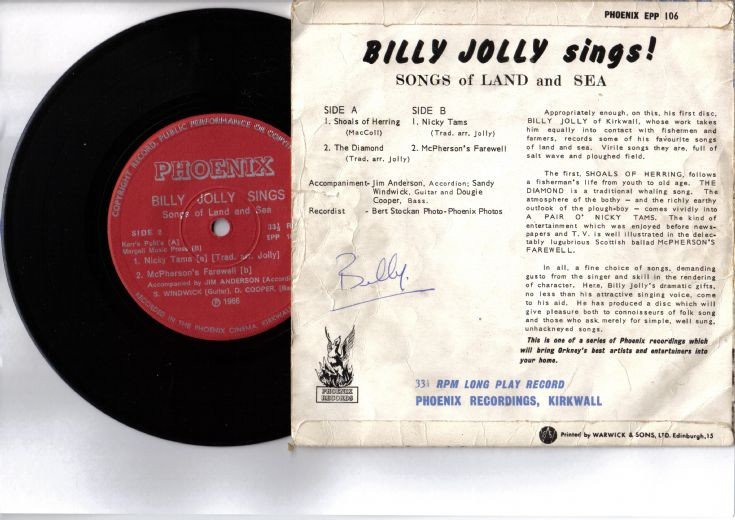 Reverse of sleeve
"Appropriately enough, on this, his first disk, BILLY JOLLY of Kirkwall, whose work takes him equally into contact with fishermen and farmers, records some of his favourite songs of land and sea. Virile songs they are, full of salt wave and ploughed field.

The first, SHOALS OF HERRING, follows a fisherman's life from youth to ald age. THE DIAMOND is a traditional whaling song. The atmosphere of the bothy – and the richly earthy outlook of the plough-boy – comes vividly into A PAIR O' NICKY TAMS. The kind of entertainment which was enjoyed before newspapers and T.V. Is well illustrated in the delectably lugubrious Scottish ballad McPHERSON'S FAREWELL.

In all, a fine choice of songs, demanding gusto from the singer and skill in the rendering of character. Here, Billy Jolly's dramatic gifts, no less than his attractive singing voice, come to his aid. He has produced a disc which will give pleasure both to connoisseurs of folk song and those who ask, merely for simple, well sung, unhackneyed songs.

This is one of a series of Pheonix recordings which will bring Orkney's best artists and entertainers into your home.

View Large Version
Picture added on 10 March 2011 at 17:22
This picture is in the following groups
Orkney Records
Related Sites: Kirkwall East Church
Comments:
When I was peedie I learnt to sing Billy's songs as I was so proud to be related to him. That record was played non stop for weeks on end.

The Diamond is a ship, my lads, for the Davis Strait she's bound,
And the quay it is all garnished with bonny lasses 'round;
Captain Thompson gives the order to sail the ocean wide,
Where the sun it never sets, my lads, no darkness dims the sky,

cho: So it's cheer up my lads, let your hearts never fail,
While the bonny ship, the Diamond, goes a-fishing for the whale.

I'll be home fae France in June fur mum's 90th so hope your moothie is still in your pocket for a sing-song then Billy.