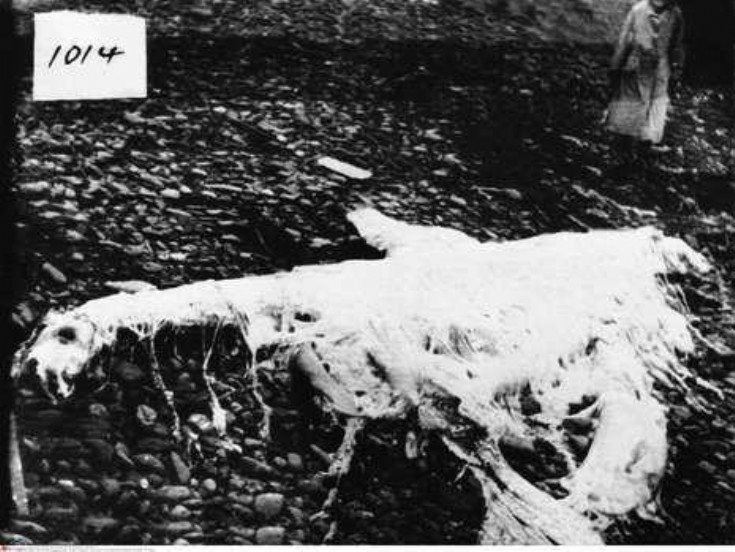 Here is a real mystery picture of a sea monster. It was sent to my by a cryptozoologist, Markus Hemmler on the off-chance that I could identify it. We know the picture was published in a German newspaper called BILD but they could not give further information and it has been mislabelled as being from Loch Ness. It shows a creature that washed ashore in Orkney but it could be one of two carcasses which washed up at much the same time.

In 1941, one creature washed up at Deepdale, Holm around Christmas time and the other washed up in Hunda about a fortnight later.

The Deepdale carcass was examined by Inspector Cheyne of the Kirkwall Police. It was also studied by Mr. Bill Hutchison. At the time people thought the Deepdale creature had been killed by depth charges.

Inspector Cheyne described it as follows:

'From head to tail it is 24 ft 8 inches long but it must have been larger than that because part of the head is torn away and some of the tail appears to be broken off.

'The hair on the body resembles coconut fibre in texture and colour. The monster has a head like a cow, only flatter The eye sockets are three inches in diameter and very deep. The neck, which is triangular, is 10ft long and 2 ft round, and at the base of the neck there is bone, shaped like a horse collar and about 4 ft thick. Across the back is a fin which is 10 inches thick at the base and tapers. This fin is two feet six inches high.

'Four flappers with bone structures like hands, each 3ft 8 inches long were apparently the monster's means of propulsion. The tail is pointed. There is at least a ton of flesh still on the body.'

The above account was published in p164 of 'Against the Wind, an Orkney Idyll' by Douglas Sutherland. 1966 by Cox & Wyman Ltd, London.

The Deepdale carcass was nicknamed Scapasaurus because it was said to resemble the extinct plesiosaurus. Samples and sketches were sent by Provost Marwick of Stromness to the Royal Scottish Museum in Edinburgh, it was identified as a decomposing basking shark. To me, the animal above resembles the sketch by Provost Marwick of the Deepdale Carcass, which was published in 'Orkney Blast' under the title 'Orkney Monster'

The Hunda monster was put on show in St. Margaret's Hope and it was also identified as a shark.

Does anyone know the source of the photo? Which carcass does it show and who is the person in the background? Where is the original photo?

View Large Version
Picture added on 09 March 2010 at 09:31
Comments:
*lol*
Compared with BILD the SUN may be called a scientific journal ... :-)
Added by Wolfgang Schlick on 09 March 2010
Yes, Markus did say it is about on equal footing with ' The Sun' but that's just where the photo appeared.
Added by Yvonne Beale on 09 March 2010
I feel that this carcass could be the one of Deepdale Holm. Dinsdale writes in "The Leviathans" that sixteen official photographs were taken from one of the carcasses (of D.H. I think). The carcass of D.H. was found through a Mr. Anderson about 200 yards from his house. Provost Marwick talked to his wife Mrs. Anderson on his second visit. The person in the background seems to me a women - maybe Mrs. Anderson?
Added by Markus Hemmler on 13 March 2010
Regarding Deepdale, Holm monster my aunt kept a diary note from January 27th 1942 ... "the sea monster of Deepdale Holm is being sent to London", the rest of her entry seems to follow the above report. We wonder where in London it was sent and who examined it. She asks in her diary "is this monster in the Natural History Museum?".
Added by Melanie Turner on 17 March 2010
Thank you for going to the trouble of looking that up, Melanie.
Added by Yvonne on 12 November 2010
My Grandfather James Anderson (aged 17 in 1941) was the son of Mr James Anderson and Jessie Anderson the people who I believe found the Orkney monster, he often told the story of the creature that washed up on the shores by where they lived deepdale (croft.) I believe the person in the picture may be one of his sisters not Jessie. He said it looked like a dinosaur its flesh was a greeny/grey colour with a mane of coarse hair on its head, and the facial shape of a sheep/horse. Looking at this photo the facial shape makes sense now.
Added by Claire Jaycock on 28 June 2011
A report from Provost Marwick acknowledges indeed that Mr. Anderson found the carcass and immediately after him Ms. Anderson saw it.

Thank you very much Claire and Melanie for your much appreciated informations regarding this case.
Added by Markus on 01 July 2011
This photo of the Deepdale 'monster' was published in The Orkney Blast, the forces newspaper in Orkney.
Added by Tom Muir on 18 January 2016
<< back