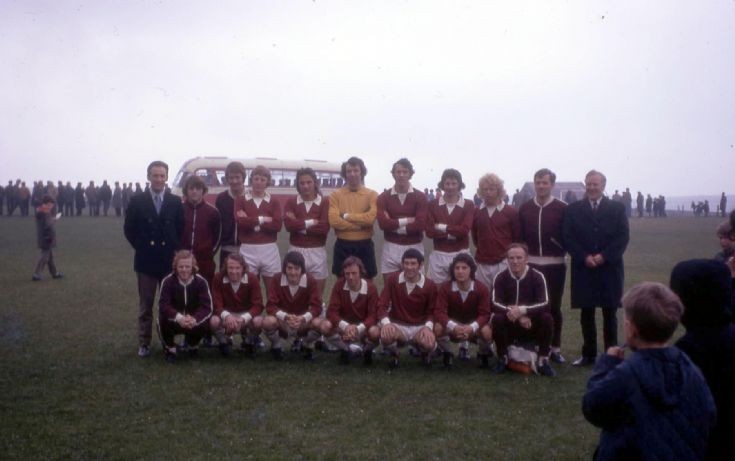 This is the Hearts team that played against Orkney in two matches,on a Friday and Saturday evenings in 1973, I think in early June.
There are two or three Scottish internationalists in here, Alan Anderson(c/h) Donald Ford (c/f) and Kenny Aird (winger) at least I think Kenny Aird was a Scotland player.
If anyone has or knows anyone who has any film of these matches, please contact me as it would be fascinating to see it, I'm sure there were cine cameras there!

View Large Version
Picture added on 31 January 2010 at 20:32
Related Sites: Kirkwall East Church
Comments:
Don't think Kenny Aird played for Scotland, think he played for the Scottish League Select. Think he was certainly on the fringes of Scotland call up, another player on fringes of a Scotland cap was David Clunie, think a broken leg hampered his career. The Hearts goalkeeper of the era, Jim Cruickshank, was a full Scotland international. I seem to think he missed these games because of injury. Keeper in this picture is Kenny Garland.
The matches against Hearts were played on Fri 4th May 1973 when we lost 2-0, and Saturday 5th May 1973 when we lost 8-2.
Hearts time at that time included Jim Jeffries and Donald Park. Another player who played for Hearts at the time and was making a name for himself was Eric Carruthers (3rd from right back row) he went on to sign for Derby County 2 years later but left in 1977.
Added by Raymond Grieve on 13 February 2010
I can add to the excellent details above that attendances of 400 (Fri) and 300 (Sat) were recorded.

Can anyone confirm where these games were played within Orkney?
Added by Scott Cockburn on 16 February 2010
They were played at The Bignold Park, Kirkwall. As a very pregnant spectator, I hoped my firstborn would not make a early arrival.
Added by Barbara Johnston on 18 February 2010
A good friend of mine an ardent Hearts fan has named most of the persons in the photo.
Back row L/R N/K, Donald Park, N/K, Jim Clunie, Jimmy Cant, Kenny Garland, Alan Anderson,
Roy Kay, Eric Carruthers, N/K, N/K.
Front Row L/R. Kenny Aird, Willie Gibson,
Billy Prentice, Tommy Murray, Donald Ford,
Jim Stevenson, Trainer John Cumming.
Added by Angus Main on 18 February 2010
Back Row first left in the Blazer is Bobby Seith the Hearts Manager. Opposite end of back row is Freddie Hutchison who I guess would have been the President of the Orkney F.A. at the time. 3rd left back row could be a young Jim Brown who was a sub for the Friday evening game.
Johnny - I think image is wrong way around? Note store building and goalpost behind Freddie and position of the crowd. If taken with Heart's facing the pavilion and light coming over the photographers shoulder there should be nothing behind Freddie. The store would have been on the left side of picture. Just an observation. Thanks for the memories, strangely enough I was talking about these matches to someone over the Christmas holidays and trying to recall what year. Your picture prompted a quick internet search, although I do recall many of the players who played with Hearts.
Earlier I mentioned that I thought that Jim Cruickshank was injured. The only other reason he missed the trip would have been the Home Internationals as they were played at the same time. However Peter McCloy, Ally Hunter and David Harvey (Sanday Postie) who were regular Scotland keepers of this era.
Added by Raymond Grieve on 19 February 2010
Raymond. you are right it is the wrong way round, I scanned these in from my slides, and didn't notice. Jim Cruickshanks Dad was ill I think hence him not there. On a personal note I think the Orkney team was as good as I ever played in, certainly the fittest as we trained under Bobby Wishart (ex Hearts & Scotland) for ages and he actually selected the team to play the matches.
Added by Johnny on 24 February 2010
It is DAVID Clunie not Jim! Also Bobby Prentice not BILLY.
The chap next to Bobby Seith could be Donald Park the same for John Hagart standing beside Freddie Hutchison.
Added by John A Hay on 09 October 2013
I think third from left in the back row is David Graham, taken as second 'keeper to Kenny G. The undoubted highlight of the weekend ( aside from football! ) was the ship which left the harbour early the next morning and rammed into the island out in the sound! The captain ( if I recall correctly ) was metaphorically "slaughtered" as a result! A memorable trip.....
Added by Donald Ford on 23 October 2014
Jim Cruickshank's last cap as a Scotland goalie was back in 1970 . He is not in this picture . Kenny Aird never got a full Scotland cap nor did Alan Anderson . Donald Ford got three caps for Scotland in 1974 and he is in this photo. Eric Carruthers was not transferred to Derby Co. but to Spurs .
Added by GUS LOGAN on 25 January 2015
<< back