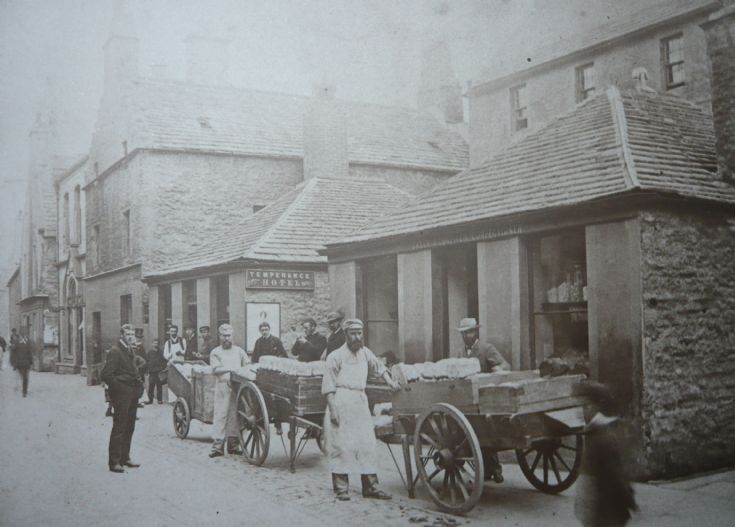 On the right is the Albert Street shop of J. Cursiter, grocer and baker. It is now Groundwaters. His other shop was where the Torvhaug is now and he also had a lemonade factory. He died in 1886, after which the business was run by his sons as Cursiter Brothers. One of the brothers was the artist Stanley Cursiter's father. Another was J. W. Cursiter the antiquary. Perhaps that is one of them behind the nearest barrow, or maybe the man standing proprietorially in the middle of the street. Next shop down (now the D.E.) was occupied by William Hourston, watchmaker and jeweller. He is the man in top hat and white whiskers. The shops flank the entrance to the big house behind, and all three properties belonged, I think, to the Cursiters. The house was, at this time, Adamson's Temperance Hotel. Adamson had moved there from the house that was demolished to make way for the Town Hall. Next shop along was, by the end of the 1880s, James Leith's butcher shop. Both it and the shop two doors further down, later Foubister's, had their gables taken down and rebuilt further back. Further down still you can see the building that was demolished in 1894 to make way for what is now St Olaf's Stores (and may soon be the D.E.) and John Kemp's. The only shop visible which looks the same today is what is now Hourstons, but was then the recently-built shop of Robertson & Co., drapers. This photo is taken from a print from the Orkney Library Photographic Archive. Date estimated.

[So was the street called Albert Street then? - Steven]

View Large Version
Picture added on 03 March 2009
Related Sites: Kirkwall East Church
Comments:
Yes, Steven, it was called Albert Street from 1841, which reminds me that I found out some more info on the naming of the streets which I meant to post on picture #2668. I'll do it now.
Added by Paul Sutherland on 08 March 2009
I was very interested in this picture, as my great great grandfather is William Hourston, watchmaker and jeweller.
Added by Kathleen Taylor on 24 October 2010
I've just come across these two photos of Groundwaters'shop and the house above it.Many happy memories are conjured up by this photo.
My great grandfather bought the business from the Cursiter brothers and it was handed down to my Grandad and his brother, Jim. The next to take it on was my father, Jack Groundwater. He invested a lot of money in the business, including new machines in the bakehouse and a complete refurbishment of the shop.
The house above the shop was home to my brother, Harvey and me during all our childhood years. When I pass by it today and look up at my home of yesteryear, I am overcome by a mixture of happiness and sadness--happiness for the memories of a wonderful childhood, but sadness to see the decline of the old house to its present state with no curtains or welcoming lights at the windows.It's a shell of its former self--just like me, I suppose.
Added by Myra Shearer (nee Groundwater). on 30 November 2014
<< back