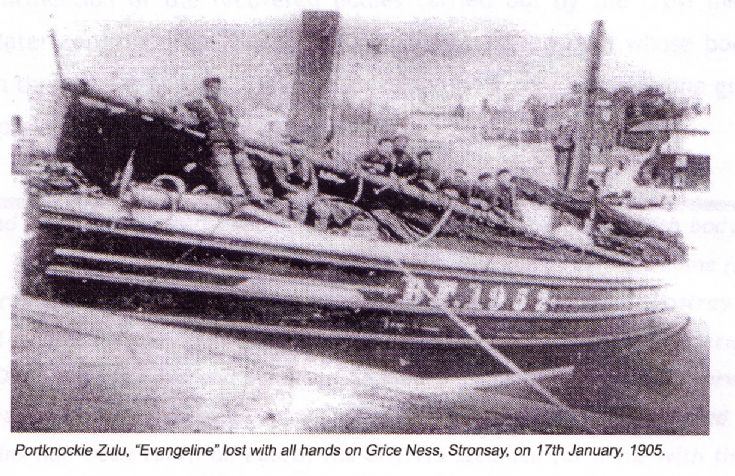 The Evangeline was lost with all eight crew members on 17th January, 1905. In the 1960s, a relative of the skipper was in Orkney and met a woman who had the ship's compass. She allowed him to take it to Portknockie to show to the skipper's family, but they had to give it back to her. Does anyone know of it's whereabouts now ?

View Large Version
Picture added on 11 February 2009
Comments:
Bill, My late father (Dod Taylor) gave me the words of the poem regarding the wreck of the "Evangeline" Sorry can't help you with the bells location.
Added by Stewart Taylor on 12 February 2009
"They came back, but not as before..." Was this in a poem about the loss of the 'Evangeline'?
Added by Tommy Garrioch on 15 February 2009
Yes Tommy, That is the one. The last verse started with the following 2 lines:- They all came back, but not as before
With a whoop and a laugh to Stronsay's shore.
Added by Stewart Taylor on 15 February 2009
I have a book about the tragedy, written by John Crawford from Buckie. This contains the poem by Reverend Walter Matthews, and includes the line "They all came back - but not as before " and is just called "The Wreck of the Evangeline " That will be what you have Tommy and Stewart. There is also another poem written by a John Cowie, possibly from Portknockie or thereabouts. It is also quite good. If anyone would like a copy of either poem, I will email one to you.
Added by Bill Miller on 15 February 2009
Yes, that line is the start of the last verse of the poem "The Loss Of The Evangeline" It was written by a minister the Rev.Walter J Mathems.
Anonymous comment added on 16 February 2009
My grandads cousin Maggie Wood 'Park' was married to one of the crew of the Evangeline. He was William Mair 'Shanker'. His brother was also drowned in this tragedy.

Maggie was left a widow with 3 young daughters all under 5 years of age.

Carole.
Added by Carole Dillon on 30 September 2009
My great-great grandfather died in this tragedy. Thank you for sharing your comments and providing more information!
Added by Victoria Didiano-Jones on 12 July 2012
My great grandfather was William Mair 'Shanker' His widow,Maggie Wood 'Park' My great grandmother, Was left with three young daughters, Williamina, Euphemia, and Isabella who was around one month old at the time.
Added by David Clark on 29 November 2012
<< back