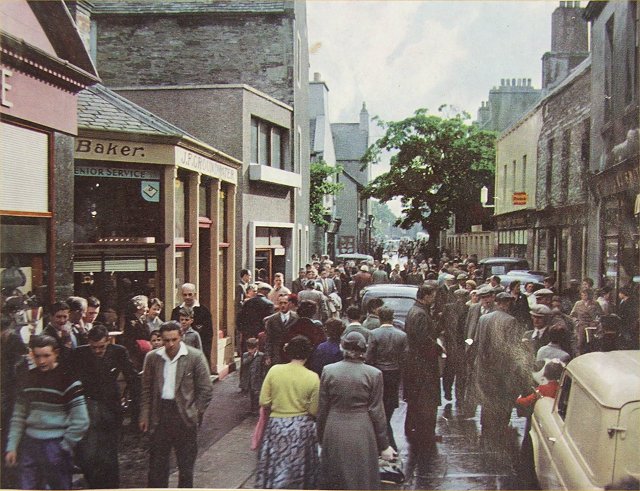 Craig writes:
'Two pictures from an old magazine from around 40 years ago, showing a very busy Albert Street and a shot of the Pier. I wonder if it was County Show Day with the street being so busy?'
Picture added on 01 May 2006
Related Sites: Kirkwall East Church
Comments:
This is an appeal to Orkney folk who may have video or cine film of Orkney recorded within the last 50 years or so, and who would be willing for it to feature in a nostalgic dvd series featuring the islands.

For the last 12 years Craig Taylor from Kirkwall has produced a series of 12 compilation dvds featuring the fishing industry from around the UK and Ireland, but has now turned his attention closer to home. Craig is now looking forward to his new ‘Orkney on Screen’ project.

Craig said that he was inspired to produce a compilation dvd series featuring Orkney footage after discussing the project with Kenny Thomson who produced the popular ‘Visions From The Past’ series during his time with the Red Cross charity.

Craig said: "The ‘Visions from the Past’ videos featured various recordings filmed in Orkney mainly between 1918 and 1960's and are a great snapshot of Orkney through the years. Kenny's last video came out well over 10 years ago, and what I am proposing to do is make almost what you could call a follow up dvd series, featuring footage recorded since the 1960's.

“It would be great to get footage recorded throughout the decades, the 1960's, 70's, 80's and even the 90's. I am looking for anything which captures Orkney, ordinary scenes of places that have changed over the years, or footage of different newsworthy events in the Orkney calendar. It is also always good to see folk you know in films like this.”

He added: “Time goes by and things change, and Orkney has certainly changed so much in those decades. Shops and businesses change, buildings have gone up and come down, boats come and go, as well as the industries which have been vital to the economy have changed. It would be great to capture the way Orkney was on a dvd to look back on in the future.

“The period I am looking for footage from covers from when cine camera were replaced by video cameras, so there is sure to be a great amount of footage on film and video tapes in attics and cupboards! It would be great if folk with footage can get in touch.”

Although a commercial venture, keeping in the spirit of the fundraising Kenny did with his video series, a donation will be made by Craig to cancer charities CLIC and CLAN following the release of the dvd.

If you have footage and are interested in the 'Orkney On Screen' project Craig can be contacted on 07802 440068. Visit the website: www.craigtaylormedia.co.uk or email craigtaylormedia@hotmail.co.uk
Added by Craig Taylor on 26 March 2012
<< back