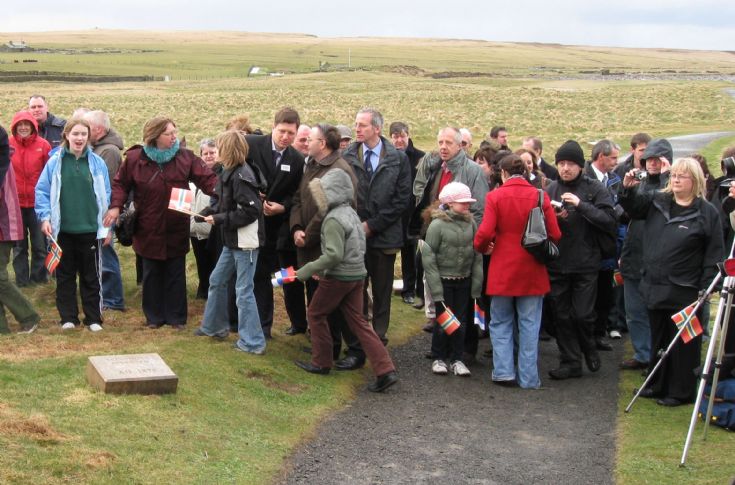 Some weel kent faces there, including Councillors Jim Foubister and Ian Johnstone, MSP Alistair Carmichael and Harvey Johnstone of Orkney College in the middle of the picture.

On 12th April 2008 a high-powered Russian delegation was present to help unveil a new stone in the Skara Brae timeline commemorating Uri Gagarin as the first man in space. The idea for the new marker was put forward by Russian journalist and TV producer Alexander Korobko, who visited the county in 2006 to film 'Who Am I', an award-winning documentary about his newly-discovered Orkney ancestry.

The event was be attended by Mr Korobko, former Cosmonaut Georgy Grechko (who has been in space three times), deputy governor of the Ugra region of Russia Oleg Gonchorov, commander of the Russian Aerobatics Team Igor Tkachenko and a Russian Orthodox priest from London.

Highlands and Islands MSP Rob Gibson, VisitOrkney staff and representatives of Orkney Islands Council were also present at the unveiling. Three Russian TV stations filmed the events, including Mr Korobko's Russian Hour TV, Russia Today and Channel One Moscow, which hoped to do a live broadcast of the unveiling.

The weather took a turn for the worse during the unveiling, which was commented on humourously by Cosmonaut Georgi Grechko, and it all passed off in an excellent spirit, with Rob Gibson MSP saying that he hoped the event was about friendship as well as a celebration of human achievement.

Your Orkneycommunities correspondent was there to record it for posterity, having bluffed his way in with the media.