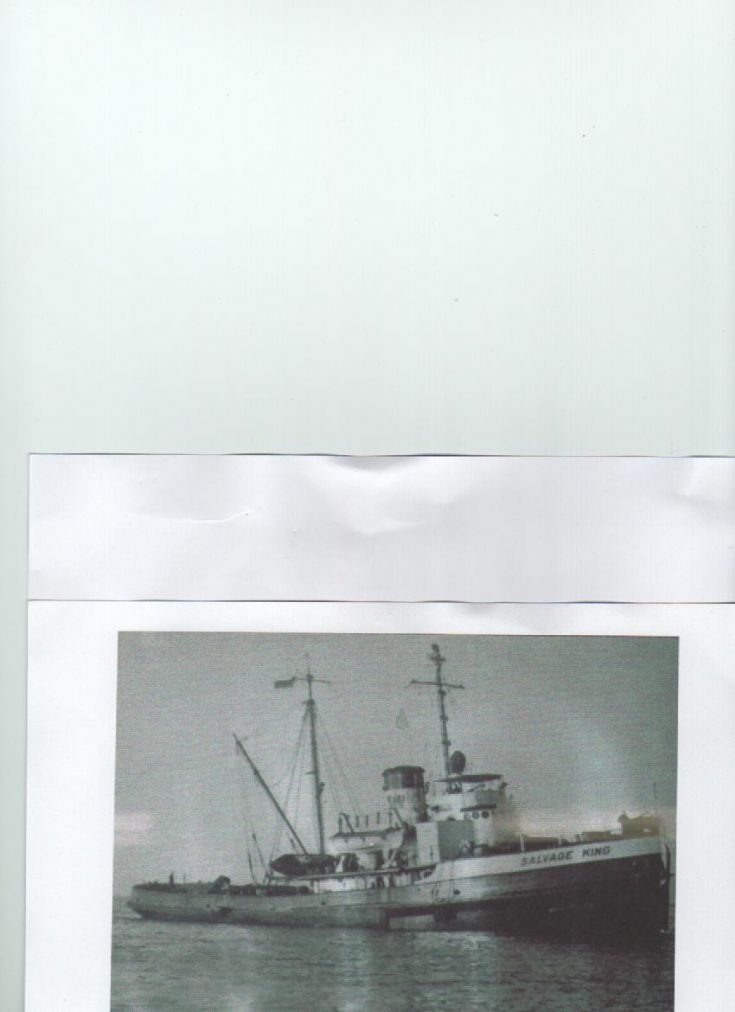 The " Salvage King " ran ashore on the Ness of Duncansby on the 12th september 1940.

Longhope Lifeboat "Thomas McCunn" Cox Billy Dass,took thirty five crew from her to another tug which was in atendance.

She was later cut up for scrap.

The Salvage King was ordered and built for the Pacific Salvage Company from Victoria British Columbia Canada, in 1925 Bow McLachan Co Ltd, of Paisley. Her port of regestration was Victoria, B.C. and she sailed under the British flag.

She went into service around Orkney for the Navy at the outbreak of the war.

Capt Hewison died in march 1940 while doing work as a salvage master for the navy in Orkney, so was not in charge at the time of her grounding.

These facts are as presented to John-o Groats Museum by Gilbert Brown.

I have heard that she was returning from attempting salvage on the "S.S Politicion" of Whisky Galore fame but I dont think the dates tie in- has any one heard that before?

I wrote a story about Captain Hewison which was published in Orkney Today last August. He was a remarkable man. Here are some details of the story I wrote:

captain john murdoch hewison made headlines in the new york herald tribune of may 8, 1929, which printed the story of how he was the skipper of a salvage tug called the ‘salvage king’ which towed a disabled freighter across the pacific ocean between alaska and japan, in horrendous weather conditions. at the time it was the longest tow ever taken across the pacific, reported in newspaper cuttings of being between 2000–3000 miles. When the tug returned to canada, he received a hero’s welcome.
captain hewison was well known throughout canada for his feats and even made headlines when he decided to marry, and again when he left canada to return to orkney to take up farming in westray.
captain hewison forsook the sea for land, and, on the invitation of his father-in-law, Mr robert scott, of trenabie, westray, he took over the farm, here too, he made good. He was up to date with his methods, he modernised the farm, he introduced the tractor, broke out more land, and built a fine new dwelling house. Captain hewison was the local representative of the recently formed orkney agricultural executive committee, and is a member of westray agricultural society, was an enthusiastic and successful exhibitor of bp cattle at the annual show.
he did not leave the world of salvage behind when he returned to westray, as he was in charge of the salvage of grain from the wreck of ss ‘borkum’, which grounded on the quoydyke, aikerness, westray in 1939 after being torpedoed by a german submarine, as well as being in charge of the salvage of the ship itself.
the vessel, actually a german cargo ship, had been captured by the british off iceland and later refloated and towed to rosyth and broken up.
tragically captain hewison never lived to see the ship towed off the rocks as he died very suddenly at home in August 1940 aged only 59 after a day’s work on the ship which was in the final stages of being prepared for the tow. In fact, the ship was due to leave orkney the day after he died. In preparation for that day a modest and proud captain hewison had hired a ship’s captain suit which he planned to have worn on the occasion, however this was not to be.
Added by Craig Taylor on 22 February 2008
John, I have a book on west coast wrecks and it says the Politician was wrecked on Eriskay on the 5th feb 1941, so the Salvage King would not have been involved in salvage attempts on her.
Added by Jimmy Hamilton on 26 February 2008
Capt. J M Hewison was my Great Grandfather, I have been trying to track down as much info on him as I can. If anyone can tell me how he and when he started his career at sea or anything else I would be very grateful.
Added by Lorna Brown on 29 March 2008
This is a pic of the second Salvage King not the first that you are refering to in the article, the second vessel was given to the Pacific Salvage Company as a replacement after the war. The ship in the picture was a US Navy built vessel of wooden construction that ended up being lost to fire in Victoria harbour in the early 1950s.
Added by Capt Lonnie Berrow, Vancouver Island Canada on 30 June 2008
This is just what this site is all about, we can only say the best that we can about our local history.

My brother Tony Budge has a cream jug given to Bob Johnston who was engineer on the Longhope Lifeboat on the night the Salvage King, was stranded on the Ness o Duncansby.

Added by John Budge on 02 July 2008
I think he was my Great great grandfather also
Added by Dennis Hewison on 04 December 2008
The photo posted by John Budge is a later vessel.
The vessel in the photo is an ex-United States Navy Rescue Tug (ATR Classification).
These vessels were wooden hulled and were all built between 1943 & 1945.
Numbers: ATR.1-ATR.40 & ATR.50-ATR.89
ATR.17-ATR.20 were transferred to the Royal Navy in 1944.