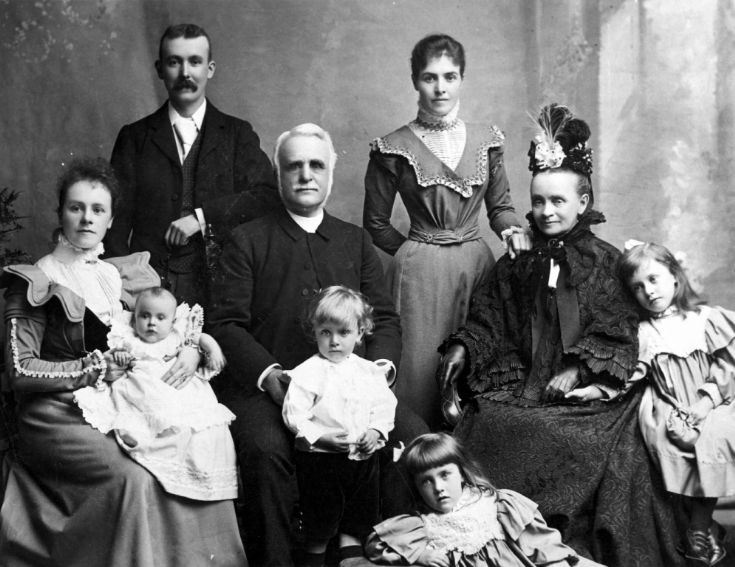 This photo is taken about 1900 and I am keen to identify the older people in the photo
The people are
Back row: David Morgan Wright who owned a chemists shop in Kirkwall, Ann Wright(?)
Middle row: Margaret Gibson Wright (nee Sclater) on her knee is Margaret (Rita) Wright-later Rita Robertson. The older two people I can’t identify-can you help me?
Front Row: David Leander Wright, Annie Morgan Wright and Janet Sclater Wright.

Could this be Rita’s christening photo? All the Wright children were born on the Orkneys-as was Margaret Gibson Wright

View Large Version
Picture added on 11 December 2007
Related Sites: Kirkwall East Church
Comments:
We now feel we have the answer to who is who. The back of the original copy of this photograph has been annotated by David Morgan Wright’s granddaughter-Maureen Margaret McKinstry and this data tallies with other research by myself and Paul Sutherland.

The Rev John Sclater was Margaret Gibson Wright’s half brother and the celebrant at her wedding to David Morgan Wright. It could be that the photo marks the bringing together of those present at the wedding (in 1892) and the children from that marriage. There was a further child James Couper Wright (1906-1969)

Several of the children (DLW, AMW &JCW) emigrated to the USA and lived in California and were later joined by their parents (DMW and MGW). James Couper Wright became a quite well known Californian watercolourist.