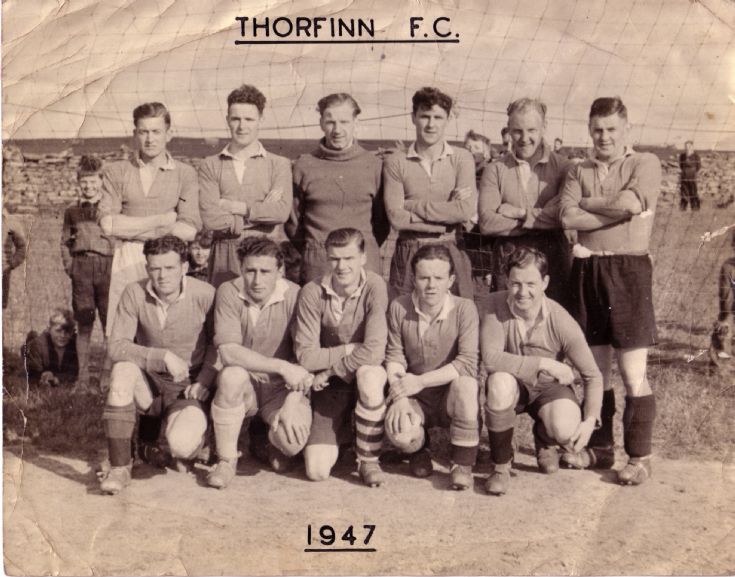 I received the following message from Mark Cabrelli who lives in Leicestershire. Can anyone help?

"Sorry to approach you but I picked your contact details off the internet from the sports webshots site. I had forwarded an email to 'thorfinnfc@hotmail.co.uk'. I suspect that possibly there is no manager of the site now or even possibly no interest. However, for my own interest I would like to know if there is any record of the team’s performance. The 1947 team looks remarkably older than the current teams but I suspect that may be a consequence of the war years. My father had been part of the rebuilding of the Scapa Flow barriers as well as serving with the Army prior to this photo".
Apologies for the intrusion.
Mark Cabrelli

This is the original message he sent:
"While going through some old photographs with my parents I came across the attached one of my father in the above team. He is Lou Cabrelli and he is on the front row second from the left. There was also an earlier picture of him in the KGS team. He is still alive but with the onset of Alzheimer's he cannot offer much in the way of detail about his time with the team. As I knew nothing about your team I checked on the net to see that you are still in existence and had a section of old teams so with this electronic age it is not difficult to send the photo. Hopefully it may prove of curiosity interest to someone though my father was 22 at the time of the photo so other survivors may be limited. I did notice that the pose of the 60/70 group was very similar even down to the cheeky kids in the background and a random spectator! I believe my father left Orkney not long after to work on the mainland. Also he had an elder sister Josie who married a George Cooper from Orkney before they emigrated to Australia about the same time. Out of curiosity I would like to know how the team performed during that time if such records exist".

I will send Mark a link to this site where he can pick up any replies. I could probably name half a dozen players but maybe someone can do the full listing.
Thanks
Rae

View Large Version
Picture added on 14 November 2007
Related Sites: Kirkwall East Church
Comments:
The Thorfinn team from 1947 were successful in winning the Brough Cup that year.
I can name most of the players; Back row: Jack Adam, Bill Sim, Bob Munro, Thorfinn Keldie, (Not sure, possibly White?), (Not sure, possibly Dave Keldie?)
Front row: John Donaldson, Lou Cabrelli, Jim Donaldson, Davo Fox, (No idea)
Players from the above photo that represented Orkney v Shetland that year include John Donaldson, Lou Cabrelli and Davo Fox.
I hope this helps Mark. There are other contributers that are far longer in the tooth than me who might know more!
Cheers
Added by G.Bruce Moar on 16 November 2007
Mark, I also added a poor quality newspaper cutting from 1941 that your Dad is in.
Added by G.Bruce Moar on 16 November 2007
Thanks for that Bruce. For Mark's information the Brough Cup is presented to the 'A'League (1st Division) winners. Mark is also sending me a KGS picture which includes his father. I haven't received it yet but I would imagine it's the same one Bruce kindly posted.
Added by Rae Slater on 16 November 2007
Hi Mark, Sorry to hear my old friend Lou has succumbed to altziemers. We were good mates when we both worked with Balfour Beatty in Argyll and Lincolnshire. Please remember me to him and his wife Georgina, if she is still alive. Lou was at Fannich before coming to Argyll and played with Inverness Caledonia and continued while at Argyll. I would like to say more but don't want to hog the site. eMail me at Ttjsctt@aol.com.

Added by Tom Scott on 16 November 2007
To complete the picture here the man on the extreme right is Dave Keldie and the man on his right is J. Scott who I believe was in the R.A.F.for a time and came from Finstown.J.Scott can also be seen in the K.G.S. photo No6098, with the ball dated 1941.

The man kneeling on the extreme right is one J.Miller who, due to his being manager of a local factory, was better known as "Cheesy".
Added by Peter Burges on 16 November 2007
The last two players in the back row are Jim Scott and Dave Keldie and the last player in the front row is Jackie Miller.The forward line that year scored over 100 goals with Jim Donaldson netting 44. Philip Brass was the manager. Philip unforunately died at a very young age. Most games were played either at Picky or at Papdale (in the field behind Garrioch Street). I came across a mention somewhere that the three Kirkwall teams only fielded 9 local players in their 1st team starting lineup (Thorfinn 4 Rovers 3 and Hotspur 2)
Added by Bobby Leslie on 17 November 2007
<< back