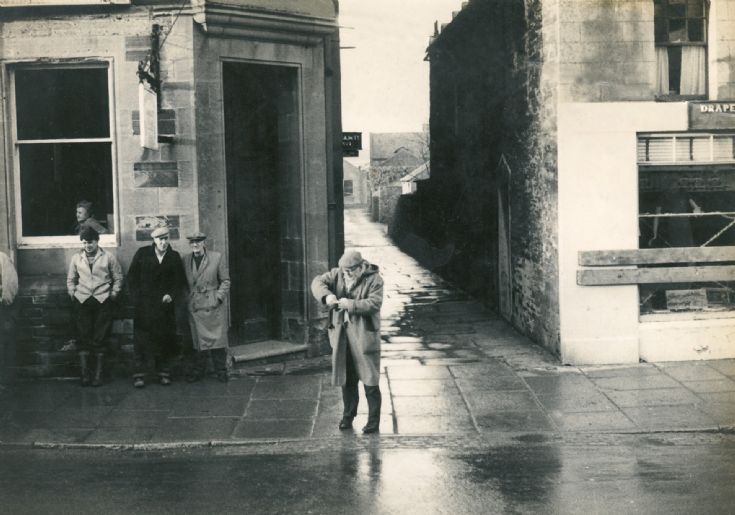 Ernest W.Marwick the local writer and historian preparing to make sound recordings at a 'Ba'. circa 1968. In the window is Mrs Sclater from the Town Hall. Standing against the wall are L-R: Josie Robinson, Jock hourston, and I don't know the name of the third person - can anyone identify him? J & M McEwan's draper shop is still in the building now occupied by Orkney Television Enterprise - since 17 March 1969, the day the Longhope Lifeboat was lost.

[Are you sure- I was 4 when the lifeboat was lost, but remember OTE where the Red Cross Shop is now, and McEwans the drapers? Was there another McEwans drapers where the Launderama is now? This is one for Eric McLennan and also Sandy and his Orkney Views I think...]
Picture added on 23 August 2007
This picture is in the following groups
The Ba
Related Sites: Kirkwall East Church
Comments:
I quote Eric McLennan whom I approached about this subject "Unfortunately the date is easy to remember when OTE bought 17 Broad street.It was the very day that TGB was lost . March 17th 1969"

[Seems definitive!- Steven]
Added by Rob Thomson on 24 August 2007
The drapers where the launderama is now was J & J Smith. That business was taken over by Mrs Jamieson who owned Cumming & Spence and the Tree Bakery at that time. The business was moved to the premises of George Rendall & Co - latterly The Leonards, and continued to trade under the name of J & J Smith for some time. Having pedalled a message delivery bike around the streets of Kirkwall for a number of years, I had a fairly good knowledge of the shops in Kirkwall during the 1960s.
Added by Rob Thomson on 24 August 2007
I am quite sure that is not my mother sitting in the window, we lived in the Town Hall house which was the top flat. The post office was where the cafe is now and was quite seperate from the Town Hall.
Added by NORMA CRAIGIE on 24 August 2007
I wondered if the lady in the window was Kitty Watt, who worked in Telegrams in the room right above the door, when the Post Office was where the cafe is now.
Added by Isobel Irvine on 24 August 2007
The Post Office moved to Junction Road around 1966 therefore the former office could have been unoccupied at that time. Does anyone else have any input?
Added by Rob Thomson on 24 August 2007
Marvellous pages for getting things sorted! I would just add that after Orkney TV Enterprise moved from Victoria Street, the premises were owned by DM Begley & Son. The Red Cross moved in 1982/83. Ernest would have loved these pages.
Added by Sandy on 24 August 2007
Post Office in Junction Road was under under construction in 1959.
Added by Bob Kelday on 07 September 2014
the post office moved to junction rd 1960
Added by Jim Marwick on 14 September 2014
<< back