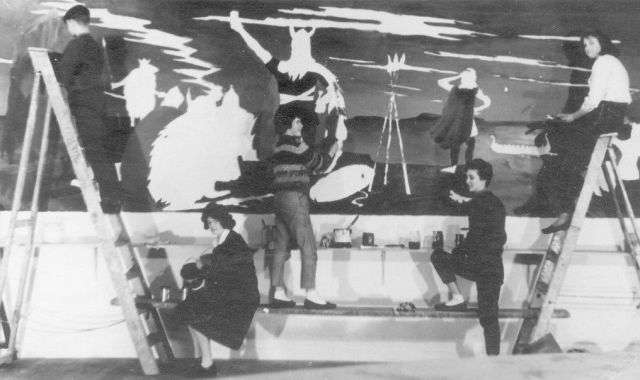 Marion writes:
'1962 viking mural - names - Alan Nixon, Thora Windwick, Linda Chalmers, Marion Wishart, Ann Young. The mural was a competition done via the senior art classes at KGS and the winners' pictures were combined into one large picture by the art teacher George Scott. The winners were given the task of painting the mural on the wall in the Kirkwall Community Centre where the Viking Youth Club held their gatherings. We only had the brushes and left over paint from the painters and decorators who had just completed painting the newly refurbished Community Centre and there was a severe lack of bright colours to use. I often wondered why they didn't do another competition in later years for the senior art classes at KGS to do another mural in the
Community Centre?'
Picture added on 09 November 2004
Related Sites: Kirkwall East Church
Comments:
I remember it well - we had a great time painting, and got time off school as well! it was quite sad when it disappeared from view - glad there is a record of it here.
Added by Lynda Pickering (nee Chalmers) on 14 November 2005
Yes Lynda, they painted that mural over when redecorating the room some years later. Pity as we put a lot of effort into it and had a great fun time doing it.

Does anyone have any memories of the Viking Youth Club that was held in this room. I seem to remember [I am too old now and my memory may be fading slightly] that it was 6d [old money] to get in and it ran 2 evenings per week. There were books and games to play like dominoes, checkers, chess, cards [as long as money didn't change hands!], music [can't remember whether it was an old style gramaphone or a jukebox. Anyone have any recall of all this?
Added by marion mcleod on 02 January 2006
The Vikings must have been a favourite topic of Mr Scott? I have a large painting done by him in 1964 titled 'The Martyring of St Magnus' or something like that, it's a little huge to lift off the wall! Does anyone know of any relatives of Mr Scott living in Orkney please? As my daughter has some old possessions of his.
Added by Paula Fisher on 08 December 2012
I mind the competition and my efforts failed miserably; I didn't inherit Mum's artistic abilities. I never got to see the finished article because we moved sooth but I always wondered what happened to it. Shame that it was painted over. I seem to remember seeing something about it in the Orcadian.
Added by Rognvald Spence on 19 May 2017
<< back