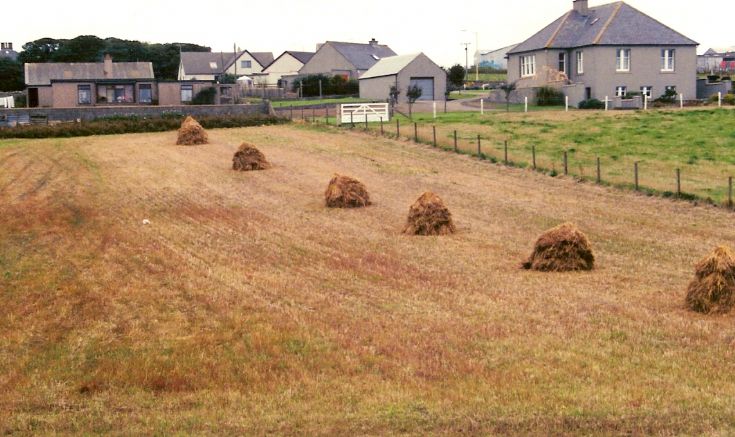 Harvest scene in a wee field opposite Mills Filling Station. I don't ken the right name for the "peedie stacks". Enlightenment welcome.
Picture added on 12 August 2007
Related Sites: Kirkwall East Church
Comments:
I would call them stooks!
Added by Isobel Irvine on 16 August 2007
Sheaves ... Stooks ... Disses ... Stacks
Added by R.W.B. on 17 August 2007
They look more like "screws" to me.
Added by Morag Flett on 17 August 2007
See picture #1353 for stooks
Added by Morag Flett on 17 August 2007
They look like very peedie disses
Added by Allan Besant. on 17 August 2007
They remind me of coles (hay)
Added by Leslie Sim on 18 August 2007
Lumps o gress tae me
Added by Violet Perfect on 22 August 2007
Dear Violet less than Perfect,
Behave yourself! This is serious straw.
Added by Sandy on 22 August 2007
Dear Sandy, I apologise profusely. I'm very sorry that the serious straw looks like lumps o gress.
Added by Violet Perfect on 24 August 2007
They are definitely disses this method was used when the stooks were not dry enough to build into stacks.
Added by Coin Wylie on 26 August 2007
See also picture #14068
Anonymous comment added on 08 September 2008
I mind an aald man tellan me " a diss is twa thrave". 24 sheaves = 1 thrave.
That would have been in the early 1950's.
Added by Tommy Garrioch on 19 December 2008
This thread seems never to have reached a firm conclusion. Several names relating to the drying of cut crops are mentioned. I'll list them below, with my understanding of what they mean - which in some cases is simply the dictionary definition.

Stack: a circular or rectangular pile of hay, straw, or grain in sheaf, often with a sloping thatched top. In Orkney, 'stack' was mostly applied to hay. Often in a stackyard; seldom in the middle of a field.
Stook: usually 6 (occasionally 4) sheaves (tied bundles) of a grain crop (oats or bere in Orkney)set up together to dry in the field in which they were cut.
Diss: a small stack, usually temporary and therefore not particularly well finished. The term was applied to almost any crop, not just hay.
Screw: (sometimes skroo) a stack of sheaves built in spiral fashion with the cut ends outwards, terminating in a peaked top. (A thing of simple beauty when well done.)
Cole: a small, more or less neat heap of hay. Coles were set up in rows in the hay-field. (If the weather was wet and the coles slow to dry, they would be turned over and re-made. This was called aboot-coling.)

The heaps in the above picture are apparently of straw. (Bere straw perhaps, given the smallness of the field.) Back in the day, straw was not found in fields; threshing was a separate operation from cutting. So heaps of straw in a field were seldom if ever seen and as far as I know had no special name. I'd call those in the photo 'straw-coles' - not quite big enough for disses, not bundled as in stooks.
As a non-farmer I'm puzzled by these 'straw-coles'. Did they put a combine-harvester into that rather small-looking field?
Added by Ian Hourston on 13 August 2014
The disses were built by my husband. He grows oats in our peedie field for the fun it. Once the crop is cut and stooked we have a problem with hoards of rooks sitting on the tops of the stooks to get at the grain. Robbie's answer that year was to build the sheaves into disses as the rooks could no longer get at the grain. He usually cuts the crop with one of his several binders, but, depending on the weather and circumstances, he sometimes gets a local farmer in with a combine.
Added by Cathleen Spence on 11 September 2014
They are not heaps of straw they are heaps of sheaves in other words "Disses"
Added by Colin Wylie on 11 September 2014
As indicated in my previous comment, I couldn't see that the crop was 'bundled' into sheaves, hence my puzzlement.
Thanks for the enlightenment Cathleen. Did the oats dry well in these disses?
Added by Ian Hourston on 15 September 2014
I mind going tae farm sales and the crop would be sold by the thrave that was 24 sheaves .

Added by John Budge on 17 September 2014
Ower in Longhope we called them Dasses. Sheaves were what was made by the binder, you built them either into peedie dasses or big screws and colls were loose straw piled into a mound.
Anonymous comment added on 27 September 2014
Tommy Garrioch's and John Budge's comments above are the only references to the term 'thrave' I've ever seen outside of Robert Burns' poem 'To a Mouse' (which we had to learn at school about 77 years ago). My battered copy of 'Burns', from Moxon's Standard Poets series, quotes the relevant passage:

A daimen icker in a thrave
'S a sma' request;

and helpfully provides a translation:

It's good that Messrs Garrioch, Budge & Burns all agree on the definition of thrave.
Added by Ian Hourston on 11 July 2018
<< back