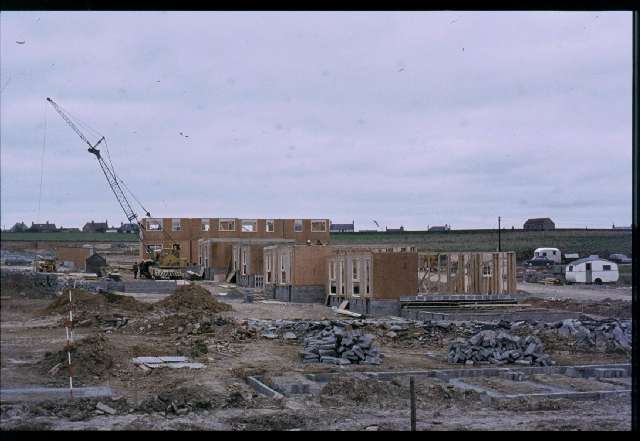 A picture taken by Andy Wylie at the start of construction of Papdale East.

Date is an estimate. What is the road in the background?
Picture added on 25 October 2004
Related Sites: Kirkwall East Church
Comments:
The road in the background could be Berstane Road as the first houses built at Papdale East were at Vasa and Torness and this photo looks like those houses. I lived at Vasa for about a year. The ground is sloping up towards the road at the back and I had a house built there near the top with which I think you, Alan, were involved in the building of.
Added by marion mcleod on 25 October 2004
I think that this picture shows Strombery looking up to Bignold Park Road, the building to the right I think is the changing rooms at the bignold park.
Added by Craig Taylor on 09 December 2004
Thanks for that one Alan, brings back some memories of my time working on the site. It would be the Craigie feller driving that crane. The red and white range rods in left foreground were probably being used by Charlie Kemp or Mike Austin. I dug some of those footings with Orkney Builders Hymac and Paddy Casey was busy laying those pipes and foundations. I later got to live in one the houses, in Ronaldsvoe. Wish I was still there and not 600 miles away in Staffordshire.
Added by Ron Greatrix on 22 May 2005
I think that this is Linklet and the foundations at the bottom of the picture are for the single storey small houses that are next to the road into the scheme.
Added by Stewart Groat on 27 January 2007
My guess is that these houses are the houses at Vasa, that are adjacent to the main road. In the picture you can see the road going up past a caravan, and directly above that another caravan that would be on the road that comes in from Meadowbank. The 2 storey house under construction will be the house that sits end on to the road as you approach the tee juction. The picture was probably taken from the site huts area, which was situated in what is now a carpark at the play area.
Added by Alastair Kelday on 28 January 2007
Sounds about right. The second wooden frame up will be Willie Bews' house.
Anonymous comment added on 29 January 2007
Well Stewart, Alistair and the 29th Jan. contributor, you’ve had me put my thinking cap on, even had me going back though my archives. First I took the photo to a program where I could enhance it. In the mid left are the spoil heaps from the foundations I was digging, also the track marks of the machine, but better than that I was able to make out my old Austin A40 car parked there just above it. I started working for OB’s 3/11/75, getting the car a few weeks later, spent a couple of months in Heddle quarry with the Late Willy Smith just after OB’s purchased it. As many people will remember, he ran it alone; shinning up the face with a ladder to drill bore holes for the blasting. Then down on to his very old Smith 2-10 digger with the drop ball smashing the rock. Loaded it into his old lorry that had no doors or windows, or indeed a proper seat, just a flat slab of stone. I once questioned him about the discomfort of that stone. “Och het’s jest fine, fae het disnae get weet yer ken.” He loaded the stone onto his lorry with a very old rope operated “Chaseside loader” Circa 1950’s.
His small crushing plant was powered by a single cylinder diesel engine that was started up from an air tank. Should the tank have lost its air overnight he had a simple solution to get that big flywheel turning. He would station his loader by the door of the lose stone built engine house, secure a wire rope to its rear shackle, lace the other end around the fly wheel shaft, ensuring the first turn involved just one crossover so that it released at the end of the pull. Worked like silk every time. Well except one time when the rope did not detach. The engine with its starter wicks smouldering the cylinder head, as always fired up but dragged the loader with wheels locked back to the doorway, and Willie jumped off at the last moment just in time to watch it wreck half of his engine house. A great guy was Willie, if he couldn’t fix a thing. It was scrap.
Somewhere I have photos of all his quarry equipment, if I can find them I’ll post them on the site.
Where was I? Oh yes, after my all too short time with Willie, the low loader came and carted me off to the scheme. Papdale.
And finally, in my archives I discovered my family and I were allocated a desirable dwelling at Hatston in June 1976, for the princely sum of £2-25 per week, and concede we enjoyed living there among this tight knit community, despite the rats that used run along the roof space of the huts. I’m sure my neighbour and workmate Bryan Leask used to beat his ceiling to drive them our way! And so it was seventh heaven when we moved into our new house in Ronaldsvoe. Once again with great neighbours: The late Jim and Sylvia Sinclair.