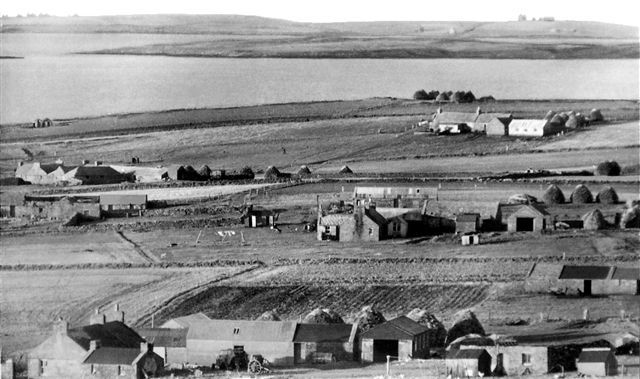 Peter writes:
"Back on the theme of Districts of Eday,the enclosed photo was originally by the late Sandy Wylie,the gentleman whose name was synonymous with the rural cinema in the late 40's/early50's. This was obviosly taken with a very large telephoto lens from somewhere on the road in to Guith.

The foreground farm is Newark, and the next smallholding on the right was evidently known as Spence's. On the right beyond this is Shoehall, and further on again on the right is the farm of Mid-guith. The cluster of haystacks,further on near to the shore is Greenynave.

On the right of the picture, after Newark, the first cluster of buildings is Bred-A-Kirk,and the larger cluster of dwellings after that is Benston Hall.
The larger island is the Pharay Holm,with the north tip of Pharay just in sight on the extreme left.

The land on the horizon is of course Westray, and from left to right the houses named are The Ness, Helzie House,The Bu, and Perth.

At this point I must pay a tribute to my very good friend John Wallace (formerly from Eday of course), and also to the Captain and crew of the Varagen, for their efforts in identification of the houses,all of whom were greatly interested in this photo."

Date is an estimate

View Large Version
Picture added on 12 October 2004
Comments:
Have just come across this super photo, and the name Sandy Wylie jogged a memory. In 1966 I was on a Scottish Ornithologists' Club 'Bird Islands' cruise around Scotland (on the Devonia, starting at Greenock) and while we were on a run ashore in Kirkwall my friend's rather nice camera suddenly packed up. We asked a passer-by if he knew any place that could do immediate repairs, and fortunately he knew Mr Wylie and showed us where to find him. Sandy duly inspected the dead camera and non-comittally told us to come back in a couple of hours. My friend's scepticism was plain to see, but we pitched up at the appointed time to be handed a perfectly working Pentax, for a ridiculously modest fee.
Incidentally, aren't those 'haystacks' really 'screws' of sheaves? Very neat too.
Added by Ian Hourston on 16 June 2011
<< back