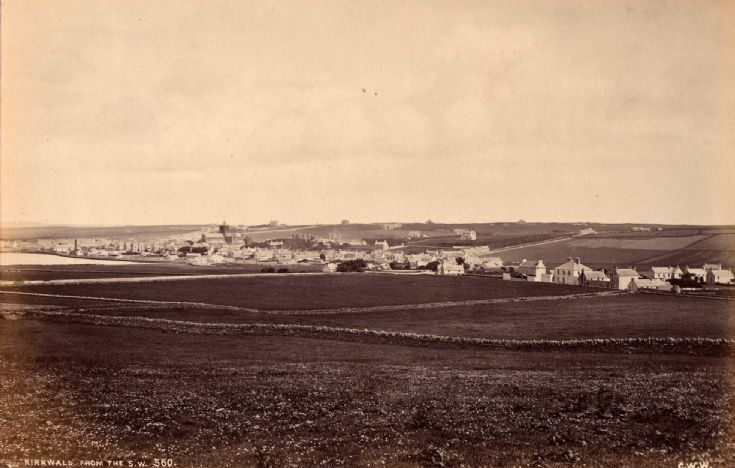 I've stared so long at this picture I feel I could almost step into it and go exploring (if only!). It's an original George Washington Wilson print I found in a second-hand shop in Edinburgh and shows Kirkwall from up about Corse. The nearest buildings on the right are Old Scapa Road (it was the only Scapa road then) and Nicolson Street. The main interest is not so much what is in the photo but what isn't. No old County Home(originally the Combination Poorhouse) for example. No Cathedral Manse either, at least not the one at the top of what is now Manse Road where it looks as though hay is being mown (19th century Cathedral ministers had their own houses, such as Daisybank, Voreshed and Rognvaldsey, until Rev John Rutherford demanded the heritors of the parish build him a manse, and all hell broke loose!). Rognvaldsey (then called St Magnus's Villa) can be seen, but there is nothing else on that side of what became Dundas Crescent except Briar Lea, and then nothing until Laing Brae. The U.P.(later Paterson and East kirk) manse, built between 1877 and 1879, is not there, and I can't make out the Sheriff Court buildings either (built 1876/7). The Aberdeen University Photographic Archive website states that this photo was listed in Wilson's 1877 catalogue, but their negative seems to have been damaged.

View Large Version
Picture added on 30 June 2007
Related Sites: Kirkwall East Church
Comments:
The photograph clearly pre-dates 1876, perhaps only by a matter of a year or two. St. Olaf's Episcopal Church has clearly not been built - the foundation stone having been laid on 21 November 1874 and the completed building dedicated by Bishop Suther on 29 July (St. Olaf's Day) 1876. (The adjacent Rectory was built in 1889.)That said, however, it is likely that had the church been only half-built when George Washington Wilson captured the scene, it would have been obscured by Buttquoy House.
By the way - does anyone happen to have a photograph of St. Olaf's (or know of one) in the late 19th/early 20th century? There are a couple in the Roddie Hibbert Collection in Tankerness House.
Added by David Dawson on 02 July 2007
Yes, the Episcopal Church is a missing building I missed! Another is the Glaitness School. The old Society School is there, but the new building (subsequently the Glaitness Laundry and Pentland Auto)is not. It was built in 1877 (according to an article by John Shearer, though Hossack says 1872). But what I think may be the best clue to the date of this picture is, if you look closely, Groundwater's Buildings in Junction Road, visible to the right of the old slaughter house, look as though they are just being built. A trawl through valuation rolls would give the date.
Added by Paul Sutherland on 17 July 2007
<< back