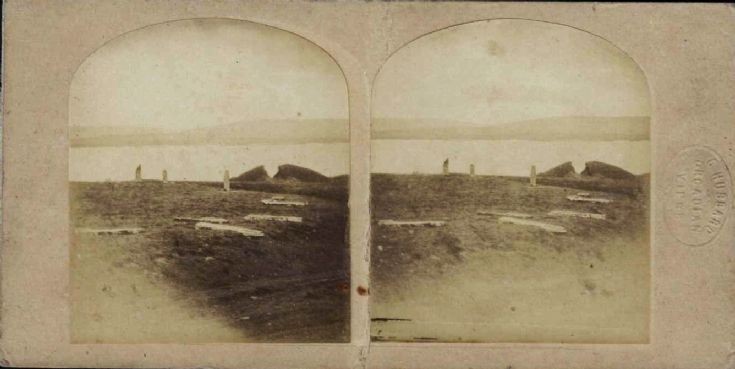 The Stones of Stenness from the south, by Charles Hubbard, taken between 1860 and 1867. This stereo view has a label that notes '…a little beyond is one of the mounds or tumuli cleft in the middle by some Antiquarians a few years since, but nothing of consequence was found but a few bones of some gigantic human being'. This is in fact the Ring of Brodgar (the 'Stones of Stenness' was a generic title for all of the standing stones in the area in the 19th century) from the south by south east, with the five prostrate stones in the foreground, numbered 1, 2, 6, 7, 8 and 9 on Lt. F. W. L. Thomas's 1849 General Plan of the Antiquities of Stenness Orkney. Interestingly half of stone No. 1 is missing in Hubbard's photograph. The 'tumuli' was intact in 1849 but Thomas noted that the owner, David Balfour of Balfour, a 'zealous antiquary', intended exploring it shortly. The trench across it was dug in July 1853 by James Farrar, MP for Durham and George Petrie of Kirkwall who found cists and funerary urns, now in the National Museum in Edinburgh.
Picture added on 06 March 2019 at 13:00
<< back