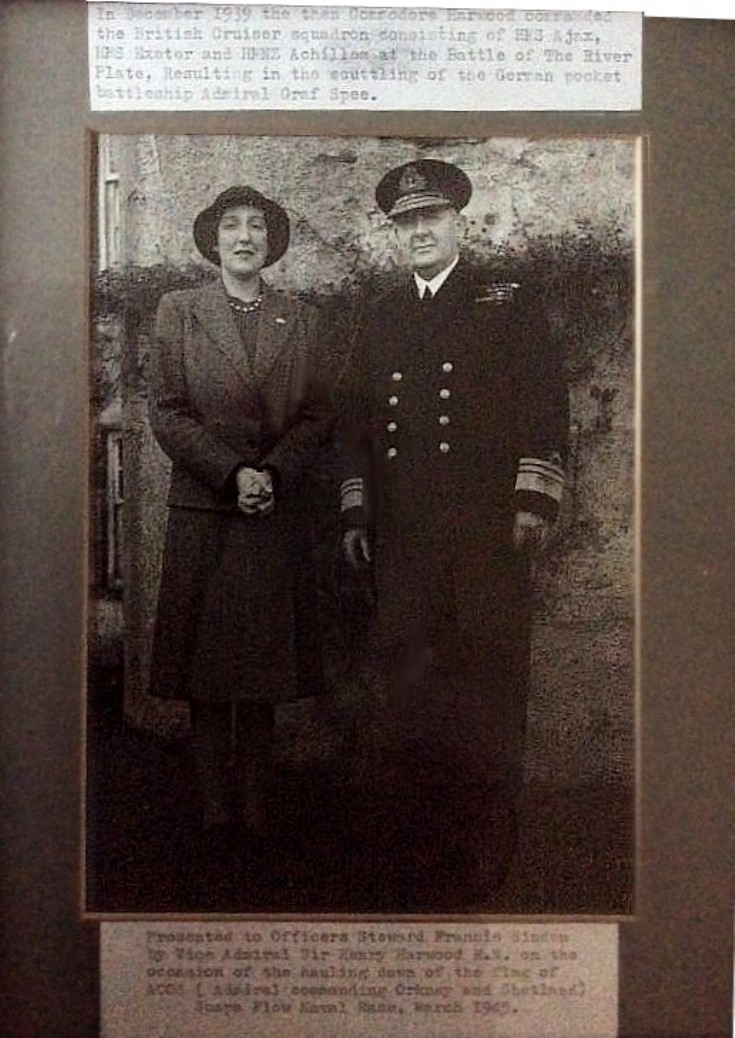 My rotation of Ian Sinden's picture #28175 hasn't improved its quality I'm afraid. Much sharpening to try to make it clearer and more readable, plus an attempt to reduce the photographer's shadow, have proved only partially successful.
In case interested viewers still have difficulty reading the inscriptions, they are as follows:

'In December 1939 the then Commodore Harwood commanded the British Cruiser squadron consisting of HMS Ajax, HMS Exeter and HMS Achilles at the Battle of The River Plate, Resulting in the scuttling of the German pocket battleship Admiral Graf Spee.

Presented to Officers Steward Francis Sinden by Vice-Admiral Sir Henry Harwood R.N. on the occasion of the hauling down of flag of ACOS (Admiral commanding Orkney and Shetland) Scapa Flow Naval Base March 1945.'

By including a reference to his most noteworthy wartime exploit, Sir Henry is obviously guarding against the possibility of future viewers dismissing it as just another photo of some Admiral. If that's Mrs Sinden in the photo - I'm guessing it might be, since it would be a nice gesture to include the wife in a citation going only to the husband - I must say she looks fully aristocratic enough to be Lady Harwood.
My own earliest recollections (aged 8) of WW2 are of the sinking of Royal Oak and the scuttling of Graf Spee, both in the first few weeks after Britain's declaration of war against Germany. I don't think the full extent of the Royal Oak tragedy was disclosed at the time, but the River Plate victory was naturally given the widest possible publicity.

Picture added on 26 April 2016 at 21:58
Comments:
I have told this story before but make no apology for doing so again as its a never to be forgotten piece of Orkney folklore now .
Admiral Harwood was ACOS and based at Melsetter House on Hoy the Navy having taken the Big House over . Mrs Middlemore was still the owner and lived in part of the property and had staff who looked after the house and grounds. One of the staff was Willie Waters one of the Gardeners .
Willie had served in France and Belgium during WW 1 and had a rough time so staff were still working to Mrs Middlemore not the Navy .
Admiral Harwood passed Willie and said to him "Its about time you dutch hoed that path Waters.
Willie looked him straight in the eye and said ,"You might have chased the Graph Spee Buey but you will not chase me" and he walked away from the most powerfull man in the Navy in all the North Atlantic .
Added by John Budge on 23 May 2016
A heartwarming example of the famous wartime spirit John: everyone pulling in the same direction!
Do you happen to know who the woman is in the photo? On reflection, it seems more likely to be Lady Harwood than Mrs Sinden.
Added by Ian Hourston on 02 June 2016
Thank you for rotating my picture and I apologise for the poor quality of the photo. I am reluctant to remove it from the frame in order to get a better reproduction as it has fused into the frame. The lady is the Admiral's wife I believe. (Not my Mum).
Thank you also for transcribing the typewritten pages which my Dad did many years ago on an old manual typewriter.
Added by Ian Sinden on 05 June 2016
You're welcome to the rotation etc, Ian, and I'm sure you're wise not to remove the photo from its frame. However, there does appear to be a mount between the emulsion and the glass, so if you ever were forced to remove the photo, it would probably come out cleanly enough, though leaving wreckage behind.
Thanks for ID-ing the lady.
Added by Ian Hourston on 11 June 2016
<< back