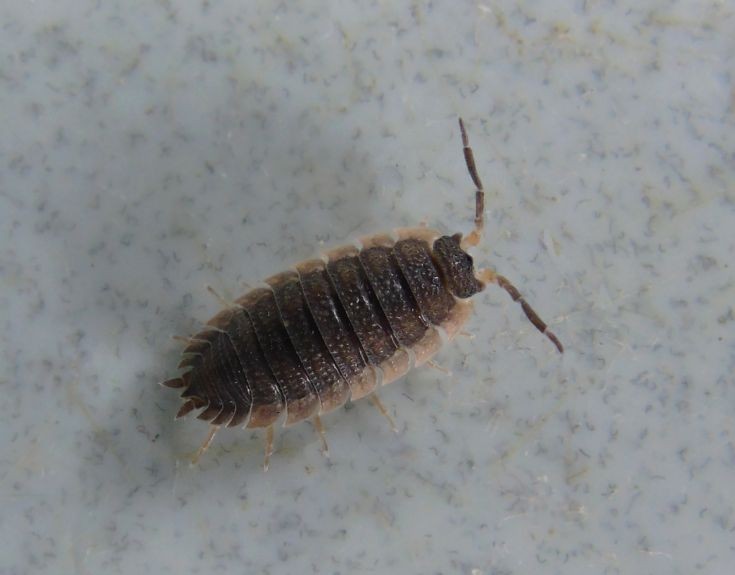 This common Woodlouse or Slatero decided to trundle across my kitchen floor last night (11 Feb 2015). When I approached, it put on quite an impressive spurt and I timed it across two 5" squares of pattern on the floor-covering at 3 seconds. 10" per 3 sec = 200" per min = 12,000" or 1,000 ft per hour. Very roughly rounded-up this is about 0.2 mph.
I idly wondered what speed it would be doing if it were a car. The slatero was half an inch long (excluding feelers); a car might be 15 feet long, ie 360 times longer. Applying that factor to the speed, we get 0.2 x 360 = 72 mph. Impressive indeed! Faster than a Cheetah.
All right, my reasoning is full of holes. If the slatero had reminded me of a tour-coach instead of a car its relative speed calculated in the same way would have been faster still by a huge margin - which is of course ridiculous. But I like the idea of a humble slatero leaving the world's fastest land mammal gasping in its wake.
Incidentally, although only 6 pairs of legs appear in my photo, the slatero (a crustacean) had 7 pairs.
The chief food of Woodlice is unsurpisingly said to be rotting wood. I wonder why we have so many in 'treeless' Orkney.
Picture added on 15 April 2015 at 21:59
Comments:
OK, as an Orcadian I would retrace the slateroo's trail and find its home. Then stomp on all the babies/eggs and get the flame-thrower on it. How dare they eat precious wood!
GH
Added by Graham Halcro on 16 May 2015
Come, come Graham, don't over-excite yourself. Rotten wood isn't very precious even in Orkney and is better broken down into a more 'useful' form of organic matter.
Added by Ian Hourston on 21 May 2015
<< back