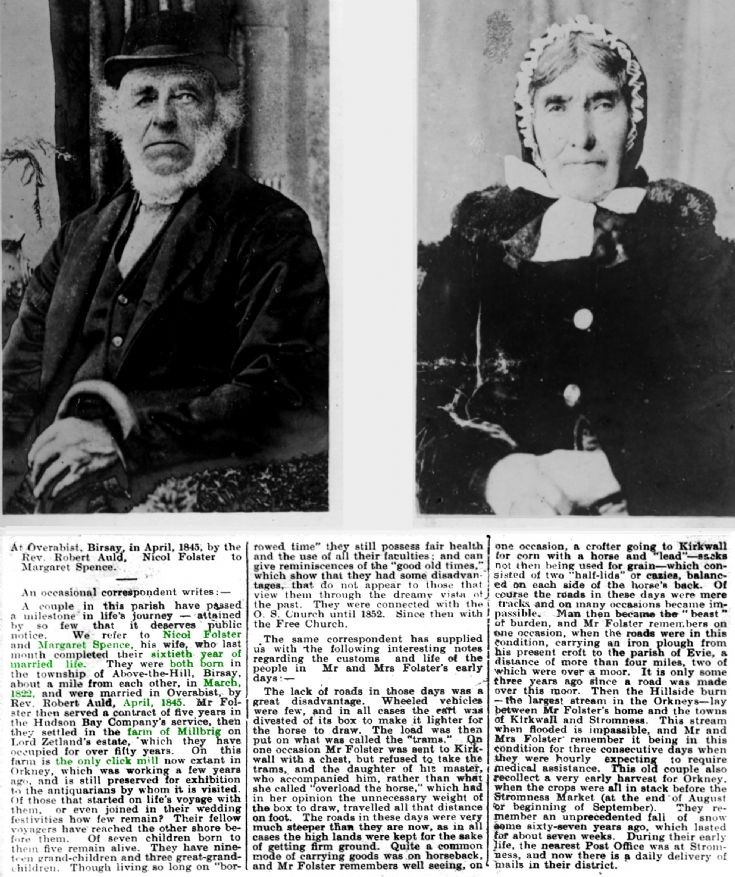 Nicol Folster and Margaret Spence were my father's maternal grandparents (Nicol & Folster were Dad's middle names, and Nicol was one of my brother's forenames). It seems the old fellow was well-regarded in the family down the generations. His wife no doubt got by on her looks.

Folster is now a very rare surname in Orkney, despite this couple's sterling efforts (7 offspring).

This newspaper cutting bears no source or date, but was presumably published in 1905. It's well written, though impassible is wrong, twice. (Impassible is a word, but it doesn't mean the same as impassable.) I've tried to tidy up the tiny print and make it more readable. It's probably worth the effort if you care to give it a try.

View Large Version
Picture added on 27 January 2015 at 22:32
Related Sites: Milestone Community Church
Comments:
Re-reading the above article, I'm wondering if it's as clearly written as I thought. Near the top of the third column - how many cazies was the horse carrying? Taken literally, the text means four, but the author may have meant just two. What do you think?
Incidentally, in his Orkney Wordbook Gregor Lamb gives three spellings for this formerly widely-used Orkney receptacle [caisie, kasie, kazy]. In a comment on his own picture #26135 on this site Ian Cameron comes up with another - craisie - but says it was simply an error on the part of the maker of the keepsake on which it appeared.
Of these five variants I'd say caisie is by far the most common. Again, what do you think?

Added by Ian Hourston on 28 January 2015
I see now my caption was also wrong, possibly twice. The cutting must have come from a paper published 60 years after the wedding, which means my caption should have said 1915, not 1905. But on close scrutiny the date as printed may be 1913, not 1915. Anyhow, apologies all round.
Added by Ian Hourston on 29 January 2015
Ian - I think we must be related, albeit distantly. I think Nicol Folster was a first cousin of my 2x gt grandmother Isabella Folster. If you email me I would be delighted to exchange family tree info. That is a wonderful article.
Added by Cathleen Spence on 30 January 2015
Nicol Folster & Margaret Spence were also my Grandfathers Grandparents. His name was John Nicol Flett. I remember being at your uncle Charles house in Oldmeldrum when my Grandfather had the Home Farm at Wartle in Aberdeenshire.
Added by Eddie Spence on 31 January 2015
I'm sure we are related Cathleen and I'll get in touch - but not right now, it's the middle of the night. You and I are obviously related too Eddie (2nd cousins once removed?). I'm sorry for being such a poor hand at maintaining family links - though I have fond memories of both Oldmeldrum and Wartle, not to mention Beaquoy and Howan. My only excuse is that I spent all my working life out of the county and indeed the country.
Added by Ian Hourston on 06 February 2015
<< back