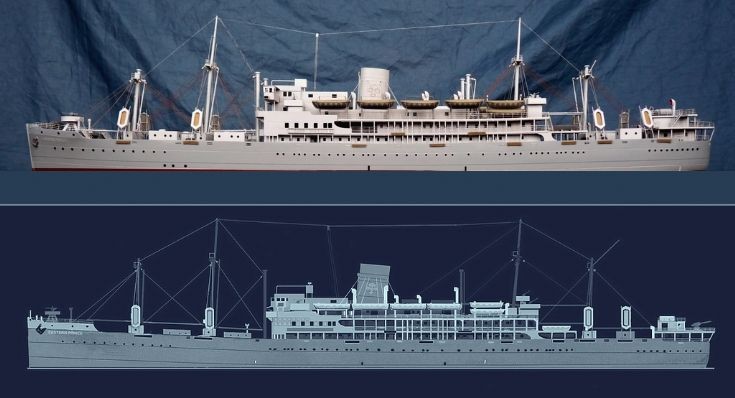 In connection with picture #27123, at long last I've got my model. One modelling firm gave up on the project, for reasons unknown, after wasting a whole year, and I had to approach another - SCALE MODELS WESTON - who got on with the job in a businesslike manner. Even then it was a longish job because plans showing the modifications made - mostly in USA - to convert her from a 'cargo liner' to a defensively-armed troopship proved unobtainable, probably non-existent. Much scrutiny of old photos and descriptions of similar ships helped to fill-in gaps, but scope remained for intelligent guesswork.
I'm very happy with the end-result. It's a full-hull model at 1:250 scale (about 28" long), but it's shown here cropped to waterline level to facilitate comparison with the profile I drew for the modelmakers. Pretty close I'd say!
Eastern Prince was my Uncle Charlie Smith's last command before reaching retiring age; he skippered her throughout most of WW2, including when she served as accommodation and support ship for PM Winston Chuchill's staff at the momentous Yalta Conference of Feb 1945.
As a cargo-liner she carried 150 1st-class passengers, and freight in her 6 holds. As a trooper she carried well over 2,000 troops - as many people as some whopping modern cruise-liners - with all but one of her holds converted into dormitories and all but perhaps 4 of her 22 cranes disabled in their stowed positions (which explains why so few crane-jibs/booms are fully visible in the photo).
Armament consisted of a 12-pounder on a pedestal at the bow, a 4" gun at the stern, and a mix of 20mm Oerlikons and heavy machine-guns in 7 gun-tubs on various parts of the superstructure. The other most obvious addition to the ship (apart from her all-grey paint-job) was half-a-dozen rectangular deckhouses covering the access points, companionways etc, to the dormitories below. Also visible are 8 Carley floats (basically life-rafts) and 10 furled scramble nets each side. The ship's normal complement of lifeboats was doubled to 12.
Eastern Prince was a 'lucky' ship that never experienced a shot fired in anger, whether incoming or outgoing.
After the war she was taken over for peacetime trooping by the Ministry of Transport and renamed Empire Medway. She was scrapped in 1952.
If Steven will wear it I may post further shots of this strongly Orkney-connected model. Watch this space.
Picture added on 04 November 2014 at 22:15
Related Sites: Kirkwall East Church
Comments:
Lovely job Ian.
Added by Steven Heddle on 04 November 2014
Scale Models Weston can take the credit for that Steven, but nice of you to say so. (I take it you may be favourably disposed towards a further pic or two?)
Added by Ian Hourston on 05 November 2014
It's interesting (vaguely) to note that the three basic types of gun carried by Eastern Prince were identified in as many different ways: by weight of ammunition (12 pounder), by calibre in inches, and by calibre in millimetres. There was no doubt a good historical explanation for these differences, but probably plenty of room for confusion also.

Added by Ian Hourston on 23 February 2015
A great job. I have Eastern Prince's bell, handed down to me and it's nice to see this model and your history with the ship :)
Added by Aileen on 07 May 2015
I don't suppose you'd be interested in selling your bell Aileen?
Added by Ian Hourston on 21 May 2015
Hi Ian. I have spoken to my dad, as he gave me the bell and we were looking into it's provenance.
The bell has 'Eastern Prince' on it, however that's all; no date. We therefore cannot know 100% which ship this is from. The likelihood, having considered the alternatives, points to your model, scrapped in 1952 in Faslane.
I can't attach photos here.
Yes, we had considered selling the bell, but have a think about the above.
Added by Aileen on 23 May 2015
Thank you Aileen. From what you say, I gather you haven't discovered an ancestor who had a close connection with 'my' Eastern Prince. I'd imagine the most likely recipient of a ship's bell would be her last Master.
A complication here is that by the time 'my' ship reached the breaker's yard she was called Empire Medway. Whether her bell was updated on change of name is another unknown quantity.
However, if you're keen to sell the bell please contact me by email (ianhourston@rocketmail.com) or phone (I'm in the book).
Added by Ian Hourston on 24 May 2015
Hi. Do you have any information about MV Eastern Prince's crew in 1929-1931? Have just found a notebook chronicling her voyages from New York to Rio de Janeiro/ Buenos Aires. Hand written but I don't know who by or when. I do have family members who were captains but I have never seen any reference to this ship. So could be just a copy of data from some other source. Has references to length of voyage, average speed etc. Might be of interest??
Added by Theda Williams on 22 March 2016
Sorry Theda, I know nothing of Eastern Prince's ship's company in her early days; my uncle joined her in 1941.
If you're asking whether I'd be interested in seeing/acquiring your notebook my answer has to be 'not really'. My interest in the ship lies in her role as a wartime troop-carrier. Thanks anyway.
Added by Ian Hourston on 26 April 2016
Hi Ian. I warned you I don't really know how to use the internet hence the TWO messages!!! I've enjoyed reading the messages on both sites! Thanks again!
Added by Theda Williams on 26 April 2016
Hi Ian, love your model. Just wanted to share my father's memory of the ship. He was a radio officer, a Marconi man, and his first ship was the Eastern Prince in 1948, when she was being used to return Axis POWs from North Africa. They would sail to Trieste and German prisoners would then be put in trains, some in normal trains to West Germany, some under armed guard to East Germany. He had fond memories of one night sailing up the Adriatic in the moonlight and the Germans had a scratch band on deck and a tenor sang Danny Boy (my dad was Irish).
Lt. Godfrey Place of the X-craft attack on the Tirpitz served with my dad on Eastern Prince and he remembered Place would wear his VC ribbon under his lapel so it wouldnt be seen.
Added by Sean Doocey on 10 January 2021
<< back