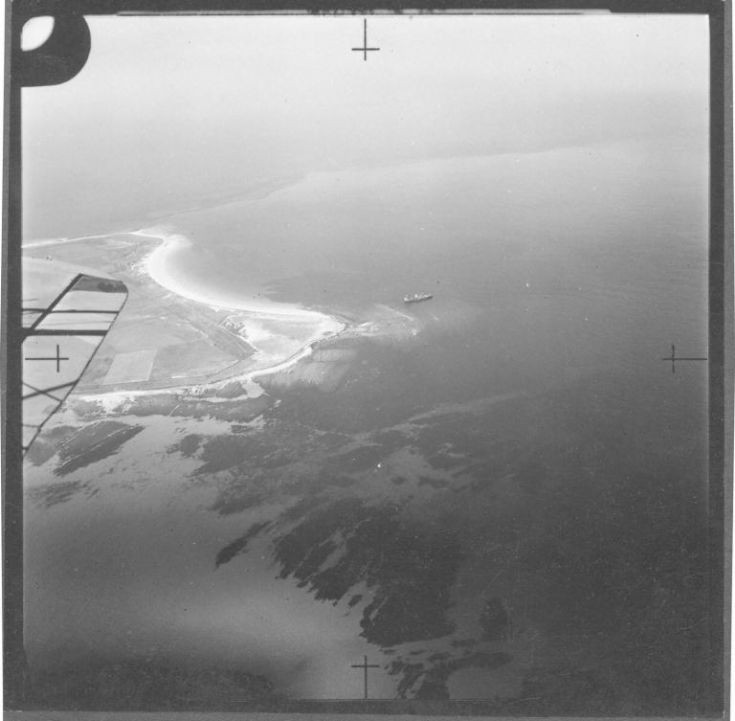 28th August 1942
Foulan, Sanday. what ship?
Picture added on 07 June 2012 at 23:13
Comments:
Probably Swedish freighter Wanja.
Added by Ian Hourston on 08 June 2012
Wanja, from Sweden.
Added by Tommy on 08 June 2012
Wanja was wrecked 14 Oct 1939; it seems surprising (though not impossible) that it was still apparently on an even keel in summer 1942...
Added by Tris on 12 June 2012
The Norwegian cargo vessel, the SS Wanja, was on passage from Boca Grande (South West Florida) to Sweden with a cargo of Phosphates, when she ran aground on the Foulan (on some maps it is named as ‘Whitemill’), North Burness, Sanday, on the 15 October 1939.
Earlier, she had been intercepted by a Royal Navy Vessel and told to proceed to Kirkwall to have her cargo examined (in case she was working for Germany). Rumour had it that the Master thought that the route given was landlocked, so he tried different one! Another story was that it was deliberate.
She could have gone ashore at full steam as at certain low tides it was possible to stand on the rocks immediately beside her. (If one then looked up at the sky, suddenly the clouds were stationary and the Wanja was falling over. For a peedie boy, this was frightening).

I seem to recollect that the Germans had a go at bombing her – missed, but some rocks were moved.

The Wanja was cut up for salvage – useful in wartime.
There was a ‘Blondin’ arrangement from the ship to the shore. The platform was used to carry workmen and gear to and from the ship.

A wooden boat named ‘the Shannon’ (Master - George Oag) was used to transport the phosphates, or it might have been the salvage metal, from the Wanja to Stronsay pier. (Stronsay pier had full deep water access for big ships – Sanday pier didn’t). A relatively small vessel had to be used so that it could get alongside the Wanja at high water.

Unfortunately the Shannon dragged anchor during a storm and was wrecked on the Skerries in Otterswick Bay.

There is a sad sequel to the wreck of the Wanja.
A boat called the ‘Nellie’ was later used to transport the salvage to the Stronsay pier.
Unfortunately, during a storm, she was wrecked on rocks off Stronsay on 5th November 1941 with a loss of all seven crew.
For more information on this, see Stronsay Limpet, Issue 57 2010 Nellie (Thanks to Bill Miller).
Also see ‘S/S Wanja’ on Google, from where some of this information was obtained.