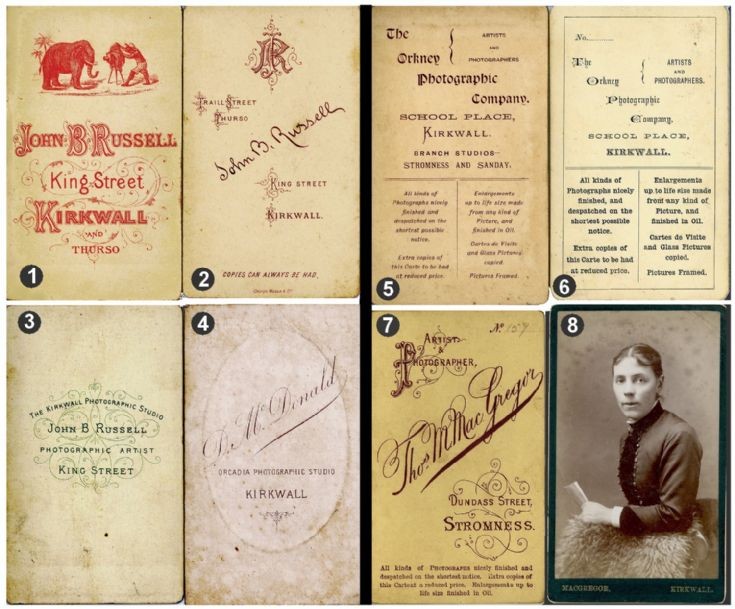 Four Orkney photographers, ? early 20th century.
Yesterday while rummaging in a cupboard I came across an old photo album. Although expensively made, with leather covers and brass fittings, it was falling apart from sheer age. The photos inside were all of people whose identity is completely unknown to me; there were no captions or titles. To me, the backs of the mounts were more interesting (with one exception).
The photos, from photographers across the UK, were all the same size - the size of a normal playing-card (and curiously there were exactly 52 of them) mounted on substantial cardboard backing carrying, in most cases, the photographer's details.
1, 2 & 3 are from John B Russell, who would have us believe he habitually photographed elephants. 4, badly faded, is by D McDonald. 5 & 6 are from The Orkney Photographic Company, possibly its Stromness branch. 7 & 8 may both be from the same photographer, MacGregor, though one is from Kirkwall and the other Stromness (the spelling of Dundass is unconventional). No 8 is the only one with the photographer's name on the front and nothing on the back.
In his fascinating booklet 'History of Stromness 1900-1972' George S Robertson (former town provost) gives a pretty comprehensive list of Stromness shops and businesses in that period, but there is no mention of a photographer in Dundas St - MacGregor or otherwise.

View Large Version
Picture added on 23 January 2012 at 11:04
Related Sites: Kirkwall East Church
Comments:
What skill was involved in making/ carving the blocks to print these lay-outs. It took years of training. Now I can do the same thing in five minutes. Different world!
Added by Sandy on 23 January 2012
Two of the four call themselves artists first and photographers second. Thinking of Ronnie Barker, as Magnus Magnusson, asking (re Dean Martin) "What kind of artist?" I'd do no better in the present context than Ronnie Corbett's hesitant response, "Er, p-p-p-pass."

I have no real reason to doubt that if, say, you wanted to sit for your portrait in oils, these people would be happy to oblige, but I suspect most of their artistry would be involved with hand-tinting monochrome prints. Or perhaps they were just stating their position on the once-fashionable question 'Is photography art?' by saying, in effect, no it isn't but it's near enough so we can do both.
Added by Ian Hourston on 24 January 2012
Wouldn't a wide range of fonts, decorative motifs, etc have been part of a printer's stock-in-trade, Sandy?
Added by Ian Hourston on 24 January 2012
Ian - I think no 1 is great, what a bizarre piece of advertising!
Added by Jim Eunson on 24 January 2012
It's tantalising to see 'Copies can always be made', and to wonder where all the negatives went. Is it mere coincidence that my neighbour Harry Russell is also a photographer, or is there a family connection? I should ask!
Added by Steven Heddle on 24 January 2012
It's probably forlorn to hope the negatives still exist. My mum tells of a Groundwater man who lived on the road into Northfield in Holm who used to be a photographer and had a greenhouse glazed with glass plates that were all negatives...
Added by Steven Heddle on 24 January 2012
John B Russell was recorded only once in the census records. In 1881 he was living in East Road aged 38 and was born in Dumbarton. His wife Agnes was born in Clackmannanshire and they had two daughters Cecilia and Agnes both born in Kirkwall. John was described as a Master Photographer & Sewing Machine Agent employing 2 girls. Given when he was living in Kirkwall I would say the photos were much older than 1910... and no connection to Harry Russell who can trace his family back through many generations in Orkney.
D McDonald appears in the 1871, 1881 and 1891 census records living in School Place. He was born in Nairn and married Robina Walls of Kirkwall. In 1871 and 1881 his Christian name was recorded as Daniel but the 1891 record shows Donald. As he had a son Daniel I would think Donald could be a typing error. Their children were William, Elizabeth, Daniel and Robina all born in Kirkwall.
Thomas MacGregor first appears in the 1891 census living at Warrenfield House with his parents and brother. The family came from Aberdeenshire and Thomas was born in New Pitsligo. By 1901 he was married to Lily who was born in Kirkwall. They lived in Castle Street and by 1911 the family were at 4 Nicolson Street. They had 3 daughters Flora, Rhena and Clare. There was no record for a Thomas MacGregor in the Stromness census.

Added by Cathleen Spence on 24 January 2012
Thank you very much for all that information Cathleen. Maybe Thos MacGregor had an employee or partner who ran the Stromness end of the business (and couldn't spell very well).
Added by Ian Hourston on 25 January 2012
I should have added I agree with you Cathleen about the likely age of the photos - they have an older 'feel'. I swithered whether to put ? early 20th or ? late 19th century in my original post, and afterwards thought I'd probably come down on the wrong side. In a moment of 'wild surmise', I even considered trying to put all 52 pictures on OIL to see if any identifications would be forthcoming but, don't worry, I'm not going to.
Added by Ian Hourston on 25 January 2012
I am almost certain that this is a type of photography which was known as Carte de visite in the 1800's.
Anyone interested have a look at Wikipedia for other samples
Added by Peter Burges on 25 January 2012
Though not exactly of the dimensions given in Wikipedia these cards are near enough: 59 x 87 mm mounted on 63 x 105 mm cards are typical measurements. So, a new term has entered my photographic vocabulary after being in existence for a century and a half (the term, not me). Thank you Peter.
Added by Ian Hourston on 27 January 2012
It has just been pointed-out to me that the Orkney Photographic Company cards shown above actually have 'Cartes de Visite' printed on them and furthermore, to make sure no-one is in any doubt about the format, state 'Extra copies of THIS CARTE [my caps] to be had at reduced price'. If my pennies take this long to drop, people are entitled to think I probably am 150 yrs old.

Please read the letter by Cathleen Spence (above)Dated 24/1/2012 where you will find all you need to know of Thomas MacGregor and his family.
I am sure his daughter Rhena was a Mrs.R. Smith who later retired to a house in Harray.

P.B.
Added by Peter Burges on 10 December 2015
A Chief Petty Officer at H.M.S Vernon, T.M. McGregor was active as a photographer with G. West and Son's "Our Navy" film and photographic company from around 1898. He photographed the Royal Cruise of H.M.S. Crescent in 1898 and later the Royal world cruise of H.M.S Ophir in 1901. See for an example www.rct.uk/collection/search#/4/collection/2581911/the-duke-and-duchess-of-york-with-prince-edward-of-york It may be that when he finished working for Alfred J. West and left the Navy, he returned to Scotland and started his own photographic business in Kirkwall. The dates mentioned above certainly seem to fit.
Added by David Clover on 29 October 2019
T.M. MacGregor was my great-grandfather. My grandmother was Clair on my dad’s side. Unfortunately I know very little about this history but I do have some photographs taken by him.
Added by Clair Morrison on 02 December 2019
I am sorting through my Mum's box of old photographs now. Quite a few portraits by 'Macgregor, KIRKWALL L.B. Note that the 'g' is in lower case. I am holding one now of a lovely lady sitting on a chair. No clue as to who she is. I have just finished scanning another three only one of which is named - GEo & Peggy Arthur. I might post a few.
Added by Rognvald Spence on 17 September 2020
<< back